Australia is a big place and getting from A to B, especially when A is Western Australia and B is Queensland, means covering a lot of distance. Cue Australia’s Longest Shortcut, The Outback Way. Its runs 2750km diagonally across Australia, between Perth and Cairns, almost halving the trip as it would be via the blacktop.

The route can be challenging, passing through remote regions with unsealed roads best tackled with a 4WD, but no other takes in as many climates, landscapes and iconic attractions as this one.

Our journey began at the southern-most end of the Outback Way, Perth, where winter’s chill was driving us northwards in search of warmer climes. 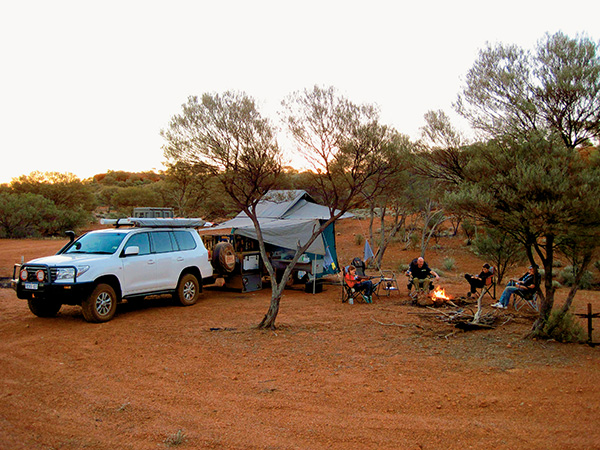 Laverton really marks the beginning of the outback section of The Outback Way. After topping up the fuel we were soon onto the gravel and letting down the tyres to smooth out some of those corrugations.

After a night at The Pines Campground, we headed to out. First stop for the day was at the White Cross, a place of interest on The Outback Way, about 231km east of Laverton. The white cross was erected by local Christians on a raised rocky range near shallows caves and a small, seasonal waterhole. We were lucky enough for there to still be some water in the rock hole, and we were treated to a lovely display by a flock of finches as they came in for a drink.

Tjukayirla Roadhouse was the next sign of civilisation and the place to stop for fuel. Diesel is available, however unleaded isn’t. Between Laverton, WA, and Curtin Springs, NT, you can only purchase Opal fuel, a low-aromatic unleaded alternative. The Fort Knox-like cages around the fuel bowsers often surprise those who haven’t travelled these parts before.

Though camping is available at the roadhouse, we pushed on a further 121km to Desert Surf Central. At first, we struggled to locate the entrance, but finally found a track and a quick U-turn later revealed a lovely spot at the base of a ridge. There was a lot of level space between the mulga scrub and we had the whole place to ourselves, far enough from the road to not hear any passing traffic. It also seemed a bit warmer that night, with the rock around us possibly trapping some heat.

Next day,  we stopped for lunch at Yarla Kutjarra campsite, a designated overnight rest area up from the road with a drop toilet. We pressed on after a quick bite, dodging a few camels on the road, with the view of stopping in at the Giles Weather Station. The time of day was perfect for taking photos at the Len Beadell Ghost Gum plaque with the picturesque ranges in the background.

Giles Weather Station was established in 1956 to provide weather data for the UK atomic weapons tests at Emu and Maralinga and the rocket testing program at Woomera. It was handed over to the Bureau of Meteorology in 1972 and is staffed year round by three people who stay for six months at a time. It is the only staffed weather station in an area of 2.5 million sq km.

Giles is also the resting place of the Caterpillar grader used by Len Beadell’s Gunbarrel Road Construction Party. This faithful workhorse came to the end of her working life after building more than 6000km of roads, which opened up this area. As each section of the road was graded five times, the old girl had actually done over 30,000km in her time. Len Beadell was also a bit of an artist and there is an example of his work painted on the wall of the small museum at Giles, along with displays of many old weather reading instruments.

Another interesting display at Giles is the remains of the Blue Streak Rocket. Launched from Woomera in 1964, they weren’t discovered until 1980, 50km south east of Giles. After seeing all the rusted car wrecks along the side of the road, the state of preservation of the rocket remains is startling.

Giles is definitely worth a stop; just remember the station works on Australian Central Standard Time, which means turning the clock forward one and a half hours of WA time. We managed to time our visit right on our return journey.

Check out the full feature in issue #89 June 2015 of Camper Trailer Australia magazine.