John Beer, from Bateau Bay, NSW, responding to urgings from his wife to close the windows whenever any rain was about, had this awning sewn up (pardon the pun) by a local shop. It attaches under the side flap with three press studs and is braced at the bottom against two fibreglass poles with occy straps. It works a treat and now Mrs Beer is all smiles.

Many a camper owner has pulled into a camp to discover that the handle of the jockey wheel has disappeared somewhere between here and breakfast time. The small grubscrew which holds many jockey wheel handles in place has a habit of unscrewing — especially on corrugations — and allowing the handle to drop off. To retain his jockey wheel handle Millburn places a dab of Loctite on the thread of the grubscrew, and to make absolutely sure, he puts a cable tie around the handle boss and over the grubscrew. 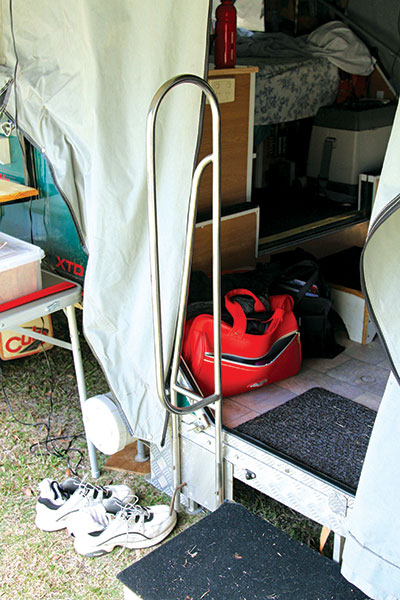 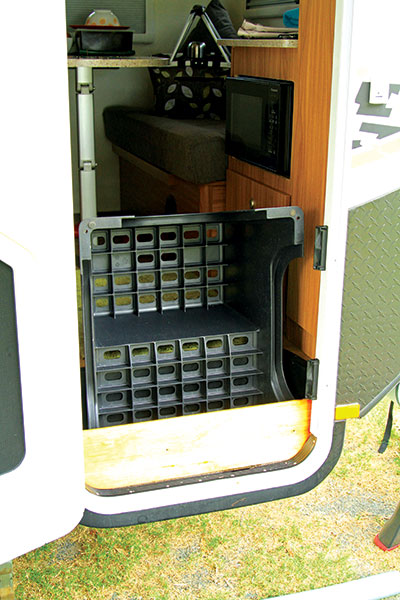 Peter Gosper, from The Entrance, NSW wanted to make life easier for his wife, Nikki, who has bad knees. The step into a Cub can be a bit high, and while he had made a step she was still a little unsteady, so he made-up a rough model of a hand rail and took it to a local metal shop. They promptly welded up this neat drop-in unit in stainless steel. Nikki's knees thank him!

The ubiquitous Hillbilly barbecue plates stand like small forests around many a campfire, but raising and lowering them requires care to avoid burns. Rather than use welder’s gauntlets, as most do, that inventive man Millburn, again, uses two hooked lengths of heavy gauge wire joined by a length of light chain, taking the weight off each end of the plate so it easily slides up and down the post.

Without a formal stoneguard on the front of his T-Van, Stuart Millburn, from suburban Sydney’s North Turramurra, wrapped the front wall of the camper with sections of marine carpet held in place by two metal straps on each side and cable ties along the top. This is loose enough to absorb the energy of any stones so they don’t rebound onto the rear of his LandCruiser and protect the front panel of the camper.

While not as thorough as a Stone Stomper in keeping unwanted stones from the front of his T-Van, Millburn has used a similar principle with some home-made mesh netting that runs from the outer corners of his T-Van to the tip of the drawbar. The shadecloth netting reinforcing has eyelets in the corners which allows it to be attached to the camper, and a narrow piece of dowel held into the edges of the cloth by cable ties gives it some rigidity. So far its done sterling work on two major outback journeys, plus many smaller ones.

When wife Sherril jammed her finger in the side of the kitchen on their Vista Crossover, Bob Lewis from Noosa Heads, installed this neat easy-open idea on the release tabs of the kitchen slide. Using 6mm stainless steel eye-bolts he simply drilled appropriate holes and now opening the kitchen is much simpler.

Most owners of T-Vans use the ubiquitous plastic boxes beneath the bed to store necessary supplies, but Stuart and Kim Millburn, wanted something a little different and had a friend make up some neatly fitting ply boxes which slide in on the carpeted floor. One of them even has the T-Van name routed into the end. They're stronger and, being made as a custom fit, provide more room.

For many, one of the last stages of packing up is stowing your dirty shoes and preparing to move on.

Lindsay and Elaine Baker from Killarney Vale, NSW use a pair of boxes, neatly cut to stack on top of each other, in their van’s step well to hold their shoes. When camped the two boxes are inverted, and hook together to form a step, with a non-slip surface on their bottoms.

As a builder Killarney Vale, NSW’s Lindsay Baker knows that every drainage system needs an air vent to assist in its free flow of water, so he developed this vent for his caravan which greatly sped-up its drainage. A T-joint before the end pipe is attached to a flexible hose which is clipped to the rear outer-wall with the end above the level of the bottom of the internal sink, and a 180-degree bend on top to keep rain out.

During travel, the curved end pipe, the hose, and its end U-bend are rolled up in the rear box.

To save water David Jones from Clifton Hill in suburban Melbourne, crimped a shifter to the edge of his camper’s awning and runs a piece of rope down from the handle into a plastic receptacle. The water collected on the awning runs down to the low point created by the weight of the shifter, then down the rope and into a collection reservoir without creating any splash. The water really isn’t suitable for drinking but it serves for washing up or showering and reserves their camper’s water tanks for more pressing use.

To get in and out of his Golf Savannah, Quinn needs a large two-step add-on, so to aid in its transport he fabricated a simple ply bulkhead to span the bottom of the footwell and places the step behind over the edge of the floor.

Anderson plugs are favoured as the electrical connection between a camper and a tow vehicle because of their capability for a positive connection and resistance to accidently pulling apart. But with a trend towards heavier gauges and rough tracks, it's not uncommon to find that plugs have parted ways somewhere along the trail, with the camper end reduced to a stump of wire and no charge going to your batteries. To prevent this, the inventive Millburn devised a simple lock which uses a top plate on the vehicle -mounted plug and a bent wire clip which passes through the outer end of the plate and one of the handle screw holes in the camper plug.

Like to enjoy a hot bowl of soup at night or porridge in the morning while sitting round a camp fire, but having trouble dealing with the hot bowl in your lap or hands?  For Jenny Peisley from Dubbo, NSW, the answer was to make some simple padded insulators. These contain cotton wadding and are shaped with four darts to give them a curve like that of the bottom of a bowl. They’re microwave-proof if you have a well equipped van and help keep warm items, warm.

Heavy rain can overwhelm the best of rubber pinchweld, especially on sloping surfaces. Craig Quinn, from Forestville, NSW stopped excess water from pooling on the outside of the seal on his Golf Savannah’s front storage hatch — from where it could seep inside any time it was opened — with a length of J-section aluminium purchased from his handy hardware store. A coat of silicone on the back stops water from getting behind the barrier.

One area of failure on many sidefold campers has been the hinges on the tailgate, especially after a lot of corrugations with a heavy kitchen on the inside of the tailgate.

Perceiving the possibility of the problem, Shane and Kim had nylon slides attached on the inner lip of their camper’s floor and built  the kitchen to neatly slide onto those strips when the gate is closed. In this way, the weight of the kitchen is supported by the floor and takes the load off the tailgate hinges.

It’s rare that you’ll want nice creases in your pants when camping, but for the occasion when that might be on the cards and you want good hanging space, Quinn made a simple aluminium cross bar he can add to the shower space in his Golf Savannah. This becomes a handy hanging rail for pants or long dresses and adds little to the van’s weight.

Once considered very exotic, LED light strips are now very common. They are held up by various hooks, Velcro, and just hang limply in tent roofs all over the place, but Shane and Kim Worth from Rainbow Flat, NSW found that an occy strap attached to one end and looped around a pole or spreader bar while the other end is anchored to a clip on a spreader adjuster under their awning keeps it neat and in place in the worst of winds.

If the wind is causing your awning to flap about noisily, you can do what Rob and Dianne Norris, from Holland Park in Brisbane did, and tie a pair of diagonals, one inside and one outside of each end wall, plus a rope over the top to keep it all in place.

When Shane and Kim had their sidefold camper custom-built, Shane designed an adjustable height kitchen in the tailgate. This allowed them to have a trailer with high ground clearance but which also  presented a comfortable working height.

The kitchen is attached to a piece of angle steel at each end which, in turn, slides on a track created by two layers of steel plate bolted to vertical sections of angle steel welded into two horizontal steel supports across the tailgate. A spring-loaded pin at each end permits the height to be locked at a suitable position.