Having followed the Burke and Wills route from Melbourne to the Gulf recently, we found ourselves at Camp 119. This is the place where the ill-fated explorers made camp before their final unsuccessful attempt to see the briny-stuff before commencing their long slog South again.  Unlike these expired explorers, we were definitely going to make it to the ocean. The fishing port of Karumba was our next destination with its promise of a cold beer watching the sunset over the Gulf of Carpentaria. Turning off the Savannah Way and heading through the township of Normanton, the mood in our rig was ‘ahoy Karumba!’ But it changed quickly to ‘aye, caramba!’ as our heads spun around to see a behemoth croc along the road-side, a block away from the tourist information centre and museum.

Many readers who’ve travelled the same way know that we’re talking about the massive replica of a saltwater crocodile along Normanton’s main street. We hopped out of the vehicle, assuming the model was exaggerated in size – something akin to the ‘Big Trout’ in Adaminaby or the ‘Big Pineapple’ in Woombye. To our surprise, the signs next to the croc and in the nearby museum, reckon it’s genuinely life-size. The massive reptile itself was reputedly shot by a 30 year-old Polish immigrant who escaped post war Europe to set up a new life here in Oz.

The story goes like this. A boy (Ron Pawlowski) met a girl (Krystina) in Perth where the couple got married, bought an FJ and drove across the largest island continent in the world, only to break down in Karumba with three kids in tow. Well, we assume there weren’t any decent local mechanics around because the family stayed on, starting up a croc hunting business to supply leather to the fashion industry. Indeed Krystina became such a good markswoman that folklore has renamed her “One Shot Krys”. Apparently she shot 5,000 crocodiles in her time and missed only three. And, as for the story of the big croc in Normanton? Well the sign reckons this saltie measured 8.63m and is largest crocodile ever shot, listed in the Guinness Book of Records. Krystina brought its life to an end with one shot, taken on the MacArthur Bank of the Norman River near Normanton in July of 1957. The giant crocodile itself is today referred to as ‘Krys’ in recognition of this lady hunter. 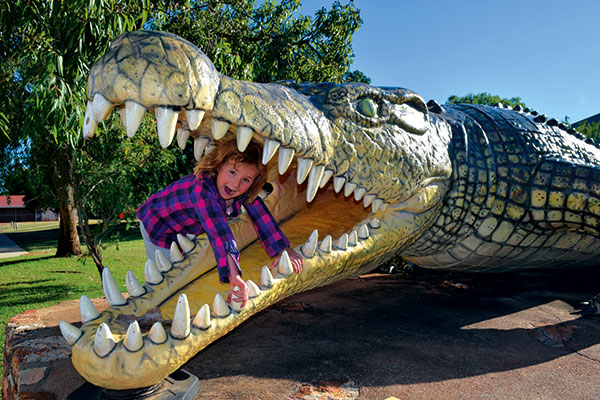 Some online sources say that Ron estimated the croc weighed two tons based on his photos. Others say the beast was so big that, while it was shot for belly leather, it was too large to roll over and skin. So it was simply left there on the bank. But if this is true, then why is there no photo of Krys the Croc in the museum? They say Ron’s originals were lost “in the 1974 floods”, but surely a story about a critter this big would’ve caused a stir among the locals. It's a pity no one else took a snapshot, particularly as Karumba was a fishing port with a booming prawning industry and a hub of Qantas flying boats. It seems curious that no one bothered to hop in a boat to have a sticky-beak and take their own ‘snaps’.

A quick Google search and you can find a photo said to be that of Krystina and Krys the Croc together. But, the origin of the photo we see today isn’t entirely certain. Some say the picture was actually taken from a croc hunt on the Roper River in the Katherine region, some 50 years earlier. Which would mean it has nothing to do with the pair of Polish taxidermists from Karumba.

A MATTER OF SCALE

But let’s assume that ‘One Shot Krys’ did indeed shoot a bloody big croc by the Norman River in 1957. And let’s say the photo we’ve seen captures its image.  Working out how big the saltie was shouldn’t be too hard. Just correlate the size of the croc with other objects in the photo and extrapolate its dimensions from that information, right? Wrong. Modern selfie takers aren’t the first ones to manipulate a photo to make their finer features appear bigger than their actual size. The same thirst for notoriety spawned similar approaches back in the day. So it’s probably no surprise that the photo of Krys the Croc is taken using a method called ‘forced perspective’. This is a technique that uses optical illusion to make an object appear farther away, closer, larger or smaller than it actually is.  This approach uses scaled objects and manipulates our perception of how they correlate with the vantage point of the camera. The effect is that it’s near impossible to work out how big the damn croc was by looking at its photo.

Not to worry. We’d read that Krys the Croc was so big it’s recorded in the Guinness Book of Records. Surely they’d have sorted this all out. So, off to the website we went. Ron allegedly supplied his photos to the Guinness Book of Records as proof of the croc’s size. Regrettably, neither the website or the latest hard copy of the Records lists ‘Krys’ or Krystina at all. They do mention a group of a thousand Japanese fighters in WWII, 980 of which met their death crossing a croc infested creek in Burma. Apparently this is the largest single incident of human death by croc. The Book’s notes then indicate this record is being revised by National Geographic based on new evidence. Is it possible that the record of Krys the Croc is also in the midst of an update which explains why it can’t be found in the official records?

Perhaps the closest we’ll get to the truth about Krys the Croc is by reference to a scientist who’s got nothing to lose but his reputation. Zoologist and crocodile specialist Dr Adam Britton said simply, “Krys is not the largest crocodile ever recorded because nothing was ever recorded.”

His point is that the legend of the 8.63m long Normanton saltie is “based on a story from crocodile hunter, albeit a well-respected one”. The problem Britton has with the story is that the reputed size of Krys the Croc is so far outside the maximum size that salties are otherwise known to grow (including skull size) by several standard deviations. Statistically, the story is extraordinarily improbable. To convince Britton, he’d want to see witnessed measurements or strong physical or photographic records.

So, is the existence of Krys the 8.63m croc improbable? Yes. Is it impossible? No.  But we’ve been around long enough to know that hunting and fishing yarns always get better with age. And hey, when it comes to outback folklore and ‘the one that got away’ it’s probably fair to say that the truth rarely gets in the way of a good story.