As you wander into the bosom of this strange landscape, through blood-red chasms and over trickling waterfalls filling tadpole-laden pools, birdcalls echo back and forth between the high, curved walls to create new sounds, and wedge-tailed eagles glide on thermals between the ochre cliff faces seeking mates before the rains come.

Sitting in the shade here, the birds come alive, screaming and mating in the surrounding bushes, while the sky and mounds of conglomerate rock collide above. Even in the middle of this barren desert, grasses, tussock and small trees spring up from the dry stone.

Uluru (Ayers Rock) and Kata Tjuta (the Olgas) are the viscera of Australia, the vital organs lying exposed to the sun, beating steadily to the rhythm of the yearly rains. It’s a slow clock, and these ancient forms enthral modern men and women as much as they did the Aboriginal people 20,000 years ago. 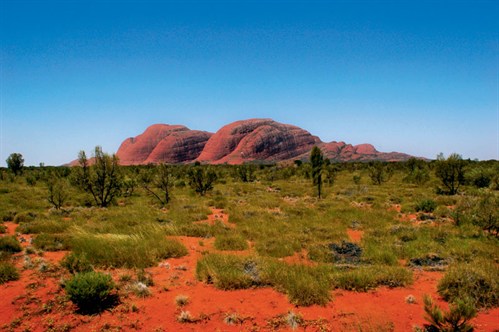 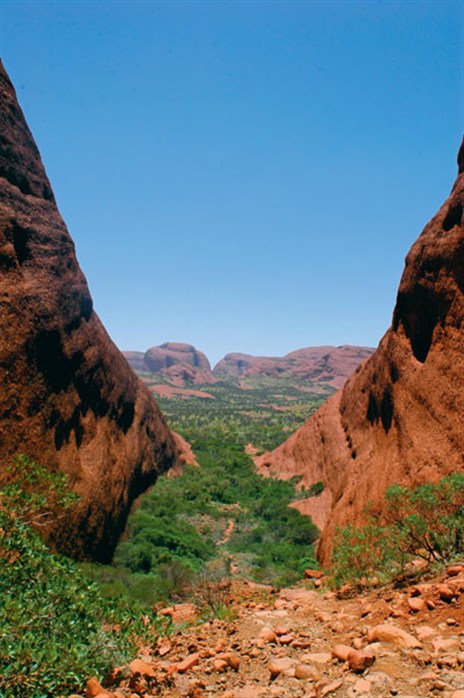 It is my humble opinion that every single able Australian should make a pilgrimage to the heart of this country at least once in their life. And while Uluru is the most well-known feature here, Kata Tjuta feels more ancient and seems to hide more secrets. These old domes and the green strips between them, laced with seasonal springs, seem like the kind of place from which life, and beautiful myths, might spring.

HISTORY OF ULURU AND KATA TJUTA

The Uluru-Kata Tjuta National Park is a UNESCO World Heritage site and both landforms are listed in the 20 top geological wonders of the world.

Kata Tjuta’s alternative name, the Olgas, comes from its tallest peak, Mount Olga, which rises 1066m above sea level (or 546m above the surrounding plain) and is nearly 200m higher than Uluru. In 1872, the explorer Ernest Giles named Mount Olga after Queen Olga of Württemberg in order to honour the famous botanist, Baron Ferdinand von Mueller, who had been made a baron by the King of Württemberg.

It took another year for Australia’s most famous landmark to be discovered by westerners, however. On July 19th, 1873 William Gosse, travelling east, reached Uluru and named it Ayers Rock after Sir Henry Ayers, the Chief Secretary of South Australia.

Kata Tjuta, the Pitjantjatjara name meaning “many heads”, is sacred to the Pitjantjatjara and Yankunytjatjara people, this area’s traditional owners who refer to themselves as Anangu. Archaeological work suggests that Aboriginal people have lived in the area for at least 22,000 years.

Kata Tjuta and Uluru were returned to the care and ownership of the Anangu in 1985 and they now jointly manage the national park with Parks Australia.

Kata Tjuta is composed of a sedimentary rock called conglomerate – a mix of gravel, pebbles and boulders cemented together by sand and mud which contains many minerals and other rock types including basalt and granite.

Uluru, in contrast, is composed of smooth sandstone which has been flipped 90 degrees. A bit like icebergs, both Uluru and Kata Tjuta extend far below the earth (several kilometres in fact) and are part of larger sections of folded layers.

The formations are the product of 500 million years of erosion after the softer rock layers surrounding Uluru and Kata Tjuta were weathered at a faster rate, leaving the massive rock formations seen today.

Some of the domes of Kata Tjuta still exhibit unique forms of erosion, like the columns of belly-button-like hollows that line their faces and act like stacked bird baths when the rains come. Watching them in the summer heat, one regrets not being here in the wet to see these terrestrial fountains in action.

Uluru: There are five main walks around Uluru, not counting the contentious path up and over the rock. While climbing the rock is frowned upon, it is still completely legal, though the parks service often finds a reason to close the climb, due to wind or high temperature.

The rest of the walks skirt the base of the rock, which isn’t nearly as featureless up close as it appears in all those travel brochures. There is also plenty of ancient rock art, particularly in Kantju Gorge on the northwest flank of the monolith.

Kata Tjuta: There are two walks within Kata Tjuta – the Valley of the Winds Walk and the Walpa Gorge Walk. The Valley of the Winds is a 7.4km return walk (three hours) that requires a reasonable level of fitness and winds through several of the Olgas. If the temperature is 36°C or above, the walk is closed, so get there early to avoid disappointment. It’s also best to walk early in the morning since there is very little shade along the trail. Several small, shaded water tank/rest stops are located along the trek, but bring water regardless.

The Walpa Gorge Walk is an easy, 2.6km return walk (one hour) into the gorge. Walpa, meaning windy, serves as a refuge for plants and animals. The rocky trail gently rises along a wet gully, passing inconspicuous rare plants and ending at a grove of flourishing spearwood.

FLORA AND FAUNA OF ULURU

The arid landscape of the appropriately named Red Centre is predominantly a burnt, sandy desert dominated by spinifex and low-lying shrubs covering small sand dunes and sand plains dotted with desert oaks. There are also large areas of mulga woodland, a stunted acacia used by the Anangu to make sticks for digging up honey ants. The alluvial flow areas at the bases of Uluru and Kata Tjuta support large bloodwoods, acacias and native grasses, and several of these oasis-type ecosystems provide restricted habitats for a number of rare plant species.

Despite the inhospitable climate, the park is home to over 170 species of birds, 20 species of native mammals and 70 species of reptiles. Visitors will most likely see the Walawuru, or wedge-tailed eagle, which uses thermals of hot air created by the desert heat to rise to great heights; the Ngintaka, or perentie, which at 2.5m in length is Australia’s largest lizard (and the world’s second-largest, only surpassed by the komodo dragon of Indonesia); or the Papa Inura, or dingo, the largest land predator in Australia. Scientists believe it descends from Asian dogs arriving in Australia about 3500 years ago, possibly with fishers from Indonesia.

The informative visitor centre inside the park offers a more detailed description of the various plant and animal species.

Uluru-Kata Tjuta National Park is 440km south-west of Alice Springs. Kata Tjuta (The Olgas), pronounced a bit like “kadda juda”, is some 30km west of Uluru as the eagle flies. The easiest way to get to the park is to drive, catch a bus or join a tour from Alice Springs. You can also fly from most capital cities to Connellan Airport just outside the park. The entrance fee into the park is $25 per adult aged 16 years and over for a three-day pass (children under 16 enter free). The park is open year-round. The closest (and only) accommodation is the Ayers Rock Resort in Yulara, with a range of accommodation options including a campground. The best time to visit is during the more temperate months of July, August or September – temperatures can be dangerously hot in December and January.