A day trip to Arltunga Historical Reserve on the eastern fringe of the spectacular East MacDonnell Ranges is a journey into Central Australia’s golden past. This ghost town in the heart of the Northern Territory was officially the first settlement in the red heart of Australia.

It all started in 1887 when alluvial gold was discovered in a dry creekbed downstream of Paddy’s Rockhole. The name of the goldfield is probably derived from the Aboriginal name for Paddy’s Rockhole which was ‘Annurra ntinga’, meaning smelly water. To the early miners, this sounded like ‘Arltunga’ and the name has stood the test of time. 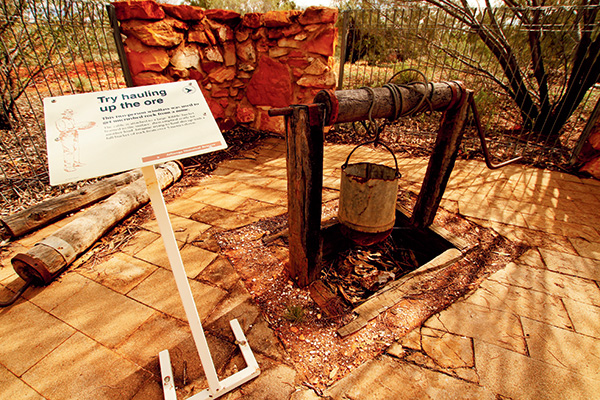 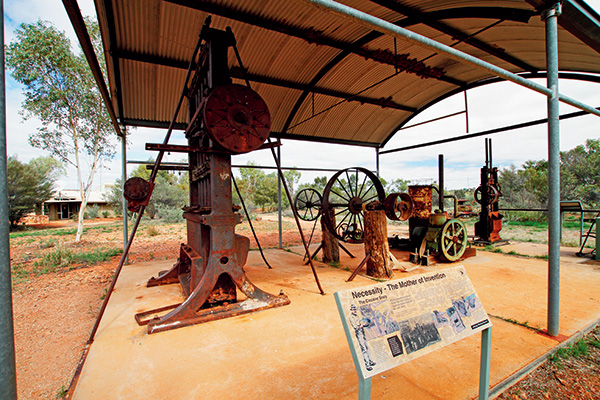 The discovery sent a shockwave through the country, luring as many as 300 fortune seekers to this harsh and unforgiving outback location. Some undertook the long and hazardous journey on foot, covering up to 600km in extreme heat while pushing a wheelbarrow with what little belongings they had.

In response to this exciting discovery, the South Australian government commissioned David Lindsay to survey the town of Stuart, now called Alice Springs, which would supply the Arltunga goldfield.

Working at Arltunga came with its unique set of problems. The harsh living conditions, extremes in temperature, isolation and lack of water made life difficult for the miners and their families. In 1890, a massive drought dried up all the wells and starvation plagued the horse teams until they became too weak to cart ore to the battery.

Mining was hard, back-breaking work and huge efforts went into making it more efficient. Gold in the East MacDonnells is not usually found as nuggets in the riverbed, but instead must be extracted from quartz deep within the ranges. Miners had to dig and move the ore by hand, using a pick, shovel and a wheelbarrow. The introduction of an air compressor and a jackhammer made this process a bit easier.

The isolation of Arltunga meant that any ore had to be crushed in a battery on site. By 1890, three private batteries had been imported at great expense but were unable to process the ore. After a petition from the Arltunga miners, in June 1896, the South Australian government gave approval for a public battery.

Equipment for the government works included a 10-stamp battery, rock breaker, automatic ore feeder, pump, boiler and 16 horsepower engine. Transportation to this isolated location was challenging. The machinery was railed to Oodnadatta then hauled by 29 camels over a period of four weeks. Problems with roads, fire and lack of tools delayed operations until February 1898. When rich reef gold was discovered at nearby White Range, the future of the field looked promising.

At long last the government battery and cyanide works began crushing and processing ore from local mines and in 1899 a police camp was established. Due to the lack of water and the difficulty in obtaining replacement parts, running the battery proved to be a challenge. A number of the buildings in this area have been beautifully preserved, giving insight into life at a remote turn-of-the-century goldfield.

The manager’s residence was undoubtedly the most impressive building at Arltunga in its day. Featuring two large rooms, as well as a back and front verandah, this structure housed the government official who was responsible for ensuring the smooth operation of the battery. His position also meant he was often called upon to settle disputes between different groups in the community.

The assayer’s residence is not quite as elaborate, consisting of only one room. His job was to account for the gold at every stage of the extraction process. Gold was tested for impurities before it was weighed and the assayer paid the miner for his efforts. This official worked in the assayer’s room at the government works where a safe was found which would have contained most of the area’s hard won gold – precious metal that would sell today for over six million dollars.

The Arltunga mines attracted an interesting mix of characters. Corporal Charles Nalty was a policeman at Arltunga from 1902-1905. He achieved notoriety when he was reported at the Arltunga races ‘drunk in the sand with his trousers over his knees’.

Henry Edward Luce was the miner who discovered the reef gold of White Range in 1897. He was an active, prominent and successful Arltunga miner from 1890 until he died in his sleep in 1903. When the policeman refused to view his body because of the hot weather and the state it was in, Luce was buried without a death certificate. He is buried at White Range Cemetery.

The appalling work conditions resulted in many miners dying from dust on the lungs between the ages of 46 and 52. Dreams of striking it rich were dashed and families were left destitute when the breadwinner died.

Many artefacts have been discovered at Arltunga. Articles like musical instruments, vegetable peelers, pipes, tins, gun cartridges, glass bottles and nails have all assisted in unravelling the stories behind Arltunga’s buildings and residents.

In 1901, the entire goldfield came to a standstill when the boiler broke down, resulting in closure of the battery. It took a year for the boiler to be replaced and activities to resume. The final blow came in 1913 when poor management forced the government to close the battery. By this time the battery had processed 15,000 ounces of gold.

The Arltunga goldfield consisted of four mines, which can still be seen today. Joker Mine was in business from 1899-1908. A horizontal drive had yielded 14 ounces of gold up until 1905, while a vertical shaft, reaching a depth of about 23m, passed through small seams of quartz of little to no value. The Golden Chance Mine was expected to yield a great return, but only 58 ounces of gold was extracted. The second most productive mine at White Range, the Great Western Mine, produced 600 ounces of gold and can be explored so remember to bring a torch.

A visit to Arltunga Historical Reserve is a reminder of the determination and perseverance of Aussie pioneers who tried to make a living in the harshest of conditions. A history lesson is not complete without seeing this outback goldfield with your own eyes.

The full feature appeared in Camper Trailer Australia #107 2016.  Subscribe today for the latest caravan reviews and news every month!