While the slogan for western Queensland town Cunnamulla is ‘appealing … naturally’, to me, it’s always been just another place on the road to somewhere else. Until now.

I was intending to pass through again, on the way further west, but several scorching days grounded me in the Paroo Shire. Usually I love a free camp but with some real downtime in the offing, I decided to find a caravan park to make full use of it.

Just 3km south of town on the Warrego River, the Cunnamulla Riverside Tourist Park offers plenty of sites for campers and big vans along with a paddock where you can find a little peace and quiet on the river bank if you don’t need to plug in. With easy access to the Warrego River and firepits at most sites for the cooler times, it’s tagged as the ‘free camp’ area. 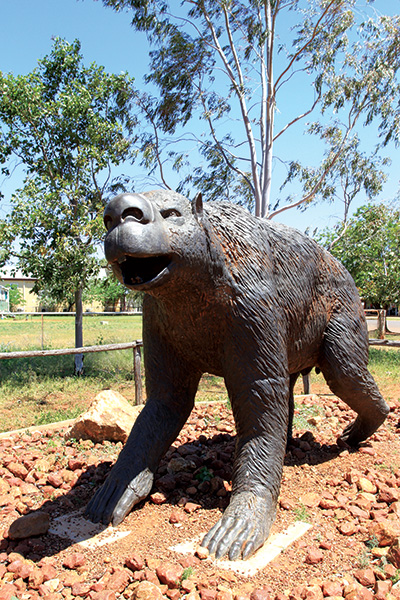 Cunnamulla is a good 800km drive west of Brisbane and is effectively the gateway to the outback thanks to several major highways intersecting the town.

Sir Thomas Mitchell explored the floodplains of the Warrego River back in 1846 but being so far away from the goldfields and other favourable areas, growth was slow. Even so, by 1860 there was an influx of settlers and graziers; a courthouse was built and the Cobb & Co coach came to town. Soon Cunnamulla became the hub for several intersecting stock routes and as the population increased, the railway followed suit and the growth continued, with shops and businesses – including a soap maker and cordial factory – and a school.

With new areas continually being opened up, Cunnamulla saw fortunes made in wool and grazing from a number of large pastoral stations, but that’s all in the past. Now it’s a sleepy town that has some secret gems hidden around the area.

Not as well-known or, perhaps, as successful as Ned Kelly, Cunnamulla briefly had its own wannabe bushranger. In 1880, Joseph Wells attempted to rob the local bank, but it all went wrong and he was wounded in the ensuing struggle. Fleeing the bank, he hid up a tree but the local dogs soon found him out.

Wells was found guilty and sentenced to death but his hiding place fared better – now known as the Robber’s Tree, you can find the heritage-listed tree less than 1km from town.

Using Cunnamulla as a base, you can explore both the town and the wider reaches of the shire. In the heart of the town, there’s a great source of history and local knowledge beside Centenary Park at the Tourist Information Centre. Here, you can pick up maps and examine displays that include the Paroo Pioneer Pathways and the Artesian Time Tunnel. Out front, you’ll find the Cunnamulla Fella. This twice life-size statue was commissioned after Slim Dusty released a song by the same name, and it’s the centrepiece to the yearly festival.

A Heritage Trail has been set up around town, which will absorb you for a few hours driving from location to location as well as taking several walkways to points of interest.

Take a 64km drive west of Cunnamulla and you’ll find Eulo (pronounced ‘you low’). There are a few good reasons to visit this small town. As well as being known for artesian mud springs and date farms, it’s also home to Kenny the Diprotodon.

Kenny was discovered in 2011 and in case you don’t know, a Diprotodon is similar to a wombat. Except Kenny is 7ft tall, 15ft long (2.1x4.6m) and would have weighed half a tonne. Roaming Australia until 46,000 years ago, Kenny is regarded as one of the best-preserved prehistoric skeletons ever found.

Visit Eulo during September and there’s something even more exciting – they hold lizard races on the town’s specially designed Lizard Racing Track!

A short drive out of Eulo is the Paroo River. Completely free of car-sized wombats, this is a great area for a picnic or to camp, with plenty of space for even the biggest of trailers.

The walking trail around the wetlands here is a must-do, highlighting significant areas on the river bank.

If opal fossicking is more your thing, just north of Eulo, Yowah offers several opal fields where you can take a tour and try your luck scratching around. Meanwhile, those wanting to experience life on a working outback station have several to choose amongst in the area – accommodation from camping to bunking down in shearers’ quarters is available. They also offer bush cooking, sheep shearing and day-to-day station life.

TACKLING THE DIRT AND SAND

These days, out here in the sticks around Cunnamulla, the landscape is vast and flat. While there aren’t any challenging 4WDing tracks, there are plenty of outback isolated sand and dirt roads once you head away from town. To the south-east, you can head into Culgoa National Park (NP), or by heading south from Eulo down into the spectacular Currawinya NP. While these roads may just be sand and dirt, they need to be taken seriously as they can hide little secrets. By lowering your tyres and knocking some speed off, most situations can be avoided. The gibber rock and washaways are also something to be aware of. I found out here that no matter how much speed you knocked off the rocks still get thrown up off the road towards the trailer and this is a great reason why you should invest in a decent camper trailer stoneguard.

After long periods of rain the dirt roads can turn to deep red slop. If the roads don’t get totally closed a good option is to select 4WD high for better control, safety and stability. Even after the wet on the long stretches of tar road, water sitting in the table drains; the hazard here to be wary of is wildlife taking advantage of the cool water and green grass, especially after times of drought.

For those not wanting to set up camp in one of the town’s two caravan parks, a great option is to head 15km south of Eulo to Wandilla Station and spend a few days on this working livestock property that gives you the opportunity to enjoy the true outback way.

Wandilla has a mixture of sheep and cattle and visitors are more than welcome to help with daily chores on the property, or they can head into the mulga on several bushwalking trails for a little birdwatching or to brush up on their photography skills. The kids will love it, too, as they can head towards the river and spend time yabbying, fishing or even kayaking. Wandilla is not hard to miss, just look for the huge SpongeBob SquarePants mailbox beside the road. The owners Carmel and David will make you feel like part of their outback family and I’m sure you’ll return for another visit.

Cunnamulla is a pretty town with majestic streets, historic buildings and proud residents. Stop and spend a little time here – you won’t be disappointed.

Check out the full feature in issue #108 of Camper Trailer Australia magazine. Subscribe today for all the latest camper trailer news, reviews and travel inspiration.