According to pioneering adventurer Paddy Pallin, “The best place to be is Here, and the best time to be Here is Now.”

‘Here’ was Gardiner Point overlooking Arthur River, Tasmania. ‘Now’ was early afternoon on a mid-summer’s day. One might reasonably expect the climate to be sunny and mild, but ‘summer’ is a relative term in Tasmania, especially on the island’s aptly named Wild West Coast.

Gardiner Point is a spit of land jutting into the mouth of Arthur River from its southern bank. Its jagged rocks, projecting obliquely from a sandy base, are painted vivid orange with lichen. They hold back a low, sandy dune mantled with tussock and saltbush, now laid almost horizontal by a freshening gale. Wedged in clefts among the rocks lie skeletons of once-proud trees and other storm-blown debris bleached white by salt and sun. 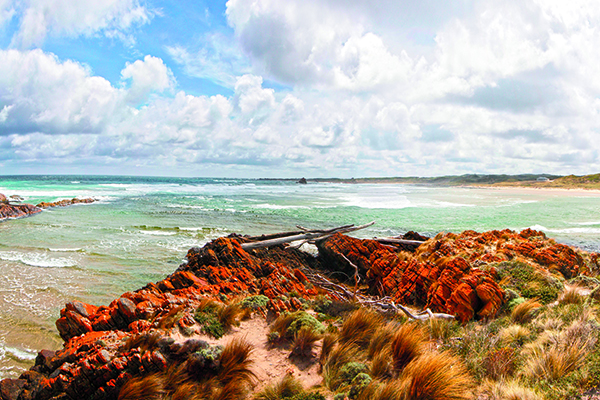 Beyond the rocks, the river pushes below the headwind through a narrow, slate-green channel, only to be met by relentless surf that sweeps the current back toward Australia Rock and a stretch of dune-backed beach that forms the northern bank. Lines of spindrift streak the tannin-brown river far upstream until it disappears in folds of forest.

South of the point, the coast continues in a series of exposed rocky shoals that stand off another log-littered shore.

Due west of here there is no land on this latitude (41° South) until Argentina, almost 17,000 kilometres away, making it the longest uninterrupted stretch of ocean on the planet.

This spot epitomises the wild and untamed nature of Australia’s island State which straddles the ‘Roaring Forties’.

For roughly 35,000 years before European settlement, Tasmania’s West Coast was occupied by Aboriginal people of four language groups - the Peerapper (West Point), Manegin (mouth of Arthur River), Tarkiner (Sandy Cape) and Peternidic (mouth of Pieman River) people. Unlike most other Tasmanian aborigines, who lived in temporary bark shelters, the Aboriginal people of the West Coast built clusters of dome-shaped huts from tea-tree bark, lined with fur and feathers for warmth, in sheltered areas near fresh water; they called the river “Tunganrick” and survived by hunting seals, wallabies and wombats, and gathering eggs, shellfish, crayfish and a smorgasbord of plants. The last Tasmanian tiger was captured near Arthur River in the 1920s.

Their culture is manifested in sites and relics – innumerable middens, hut site depressions, stone artefacts, ceremonial stone arrangements, rock engravings and spongolite quarries. The Australian Heritage Commission describes the Arthur-Pieman coastline as “one of the great archaeological regions of the world.” One site of major importance is at Sundown Point, about 8km south of Arthur River. The Heritage Register records forty separate slabs of laminated mudstone engraved with clearly defined geometric motifs, comprising concentric and overlapping circles, grooves, lines and crosses and other linear motifs, noting that “engraving sites are very rare in Tasmania”.

In the early 19th century, when the Van Diemen’s Land colony was still in its infancy, surveyors and explorers were dispatched across the island, “beyond the ramparts of the unknown”, in search of grazing land and minerals. Surveyor Jorgen Jorgenson found exploring the West Coast a formidable challenge, writing of his experience in 1827: “Fallen trees in every direction interrupted our march in this savage country. All about us appeared well calculated to arrest the progress of the traveller, sternly forbidding man to traverse those places which nature had selected for its own silent and awful repose.”

Ironically, the trees that obstructed Jorgenson included Huon pine, highly prized for its malleability and rot-resistance, much in demand by the colony’s boat-builders.

Piners were quick to exploit this resource, but as the arboreal treasures petered out, mining took over at centres south of Arthur River like Balfour, Corinna and Zeehan, generating enormous wealth for Tasmania.

When the piners moved on, only the ferrymen inhabited Tasmania’s westernmost settlement. During the late 1800s, cattle from the northwest were driven down the Arthur-Pieman coast to supply meat to the mining towns. People and supplies were carried across the Arthur River by a hand-operated cable-drawn punt, only replaced by a diesel in the 1950s.

About that time, shacks began appearing along the coast south of Arthur River, at Nelson Bay, Couta Rocks and Temma, as commercial fishermen and their families harvested abalone, rock lobster and fish from the cold waters of the Southern Ocean.

The shore is littered with dangerous reefs and rocky shoals and is frequently lashed by gales and monstrous seas. Since 1850, 25 vessels have been wrecked on this coast, including six fishing boats since 1960. A couple of local companies have opted for the safer, but no less arduous, enterprise of harvesting bull kelp, whose large, leathery fronds are processed for animal feed, liquid fertilizer and alginates for a variety of products, including ice cream.

Beyond the river, the Arthur-Pieman Conservation Area offers a network of roads through breathtaking coastal scenery. The beaches and big seas are treacherous and quicksand at river crossings has claimed many vehicles. Piled metres high against the dunes and floating on the rivers, sea foam can be dangerous: horses and livestock have suffocated in it and unwary beach drivers have hit logs and boulders hidden by frothy innocence. The notorious east-west Balfour Track traces the route of a 24km horse-drawn wooden tramway built in the late 19th century to carry metallic  ore from the now-abandoned Balfour mines to Temma harbour.

Arthur River is 197km west of Devonport and 290km west of Launceston.

There are three formal campgrounds with water and toilet facilities at Arthur River, including the Manuka Campground, which has shady sites.