When it comes to camp cooking equipment, cast iron gear is a favourite for many. But some would say this old fashioned gear has seen its best days with the advancement of other cooking materials and designs. I can’t deny cast iron is heavier than some other bits of kit; it’s been known to crack if dropped, although they’re otherwise tough as guts, but they rust over time if not properly looked after.

But you know what? Who cares? Cooking a nice succulent meal in an old cast iron camp oven is one of the most satisfying things you can do when you’re out camping, especially when you’re singeing the hair on your legs around a cracking campfire.

Granted, it’s a pretty primitive form of cook wear, but whether you’re searing a few steaks or roasting a leg of lamb, there’s very few cooking implements or materials that will rival it. For that reason, I reckon the old camp oven is one bit of kit that will never be made redundant no matter how fancy camp cooking gear gets. Call me crazy, but I reckon, with a few little pointers, cast iron gear can stay at the top of its game in the world of camping. So I’m about to give you a crash course in absolutely everything you need to know to get the very best out of your cast iron equipment. 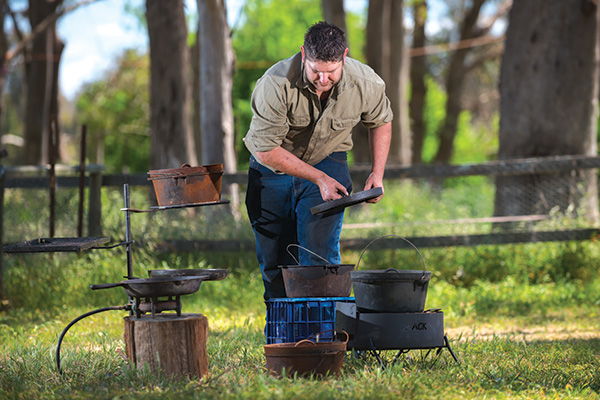 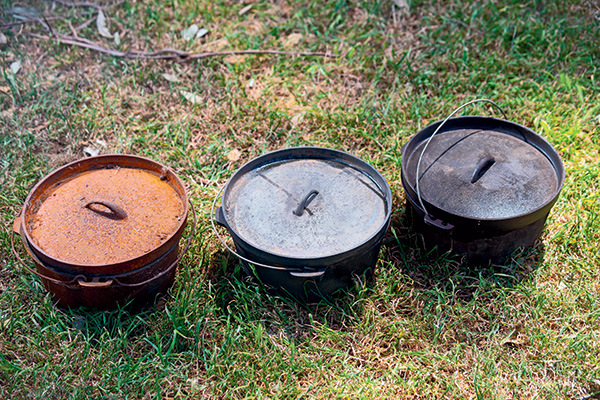 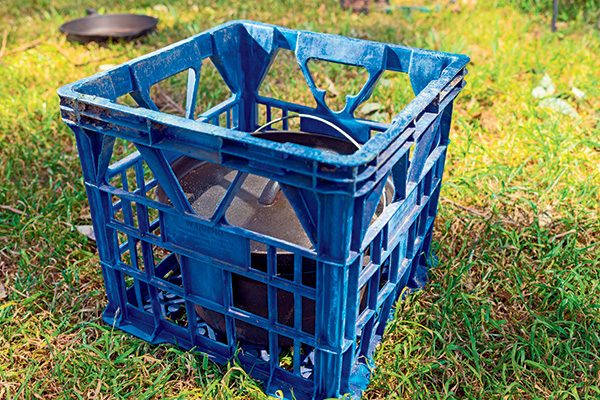 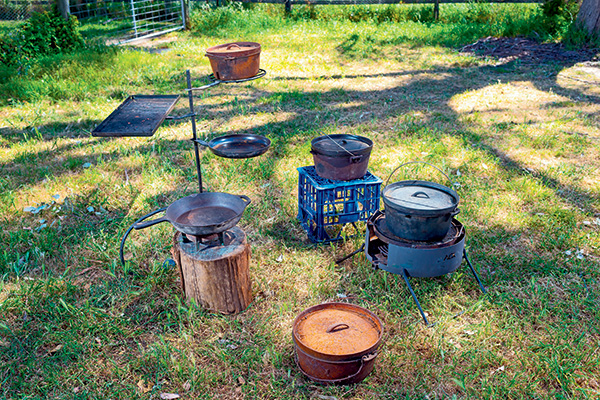 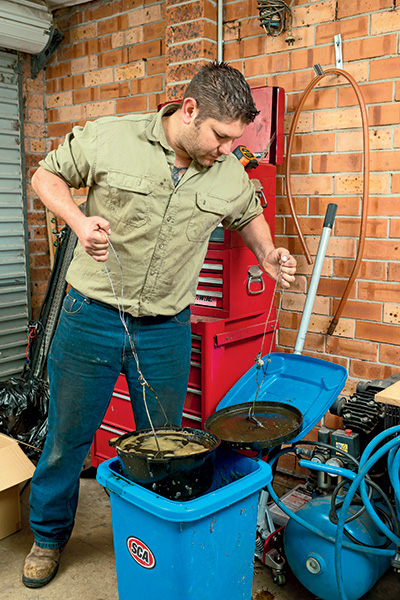 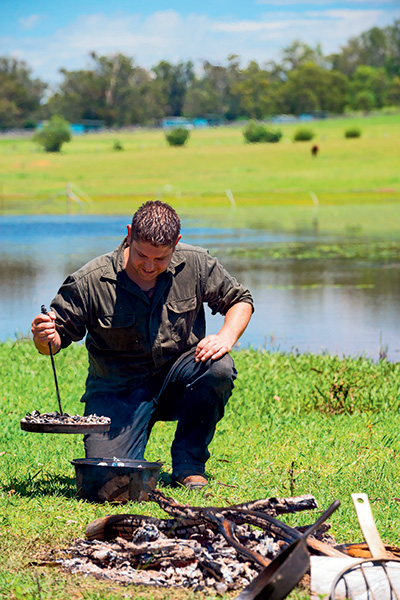 One of the best things about cast iron is its ability to retain heat, which means that once it’s hot, it stays hot! This plays a pivotal role when it comes to maintaining even cooking temperatures. The other advantage is its high emissivity, which is a technical term for its tendency to expel a lot of heat energy from its surface. The main benefit of that is that it cooks other layers of food above the actual surface instead of only really cooking whatever is in contact with the hot surface area.

Despite claims of cast iron gear being a bit on the fragile side, it’s a bloody hardy bit of kit. In fact, it’s one of those bits of gear that you’ll be handing down to your great grandkids even after years of continuous use.

Oh, and here’s a fun fact for you; cast iron is actually one of the original non-stick cooking surface materials to ever be used, and it’s still going strong. So it must have something going for it!

While cast iron is pretty tough, it’s a good idea to keep it stored safely during transit. An old milk crate is the perfect size to house a 9qt camp oven, and allows you to strap it down into position. It’s always a good idea to place a few sheets of cardboard around it to stop any unwanted rubbing or chaffing too.

When it comes to storage in camper trailers, try and position your cooking gear at the front half of the camper, which is generally the smoothest ride compared to the back half. And if you’re planning to tackle some gnarly tracks, simply fill the camp oven up with soft stuff like tea towels and sponges or rags, and strap the lid to the lower half. This can actually absorb and dampen vibrations while you’re on that big adventure.

Seasoning your cast iron cooking gear is one of the first things you should do before cooking with it. It basically gets it ready for non-stick cooking, and goes a long way in preventing your food from tasting like metal, or whatever the oven has come packed in. It also helps prevent rust, which plays a massive role in the longevity of your investment.

Seasoning your cast iron gear is basically a process of applying a light coating of cooking oil to the cast iron, then heat-treating it at high temperature. You can heat it up for a good hour or so in a hooded barbecue, or even your home oven will work but you’ll need very high heat to do the job properly. It’ll blacken up and give you a nice glazed look.

Simply repeat the process one more time and give it another clean and you’re ready to cook the best meal of your life!

The biggest killer of cast iron cooking gear is rust but, believe it or not, it’s actually very simple to keep your gear well maintained and raring to go at a moment’s notice if you know what to do.

You’ll need to keep it nice and clean and the best way to clean it is with warm water and a dish cloth. A good idea is to give it a quick clean straight after cooking your meal while it’s still nice and warm and nothing has had a chance to set like glue to the edges. Oh, and if you’ve ever been warned not to use soapy water, here’s a fun fact for you: soapy water is fine, providing the implement is well seasoned! When you’re done, simply rinse it with water, dry it well and wipe a thin layer of olive oil to help protect it from rust during storage, and it’s ready for the next meal.

If your cast iron gear is looking a bit second-hand, there’s good news! A few simple DIY techniques can bring it back to its glory days.

The first way it to use a wire brush on a drill. This is actually quite a harsh method as it strips the non-stick coating (seasoning) off at the same time. Remember to use eye protection as the specs of rust get flung around everywhere. As soon as it’s cleaned up, give it a wash in water before drying it and coating it in oil before seasoning again.

If you are after a method that requires less elbow grease, try dunking your gear in a mix of molasses and water. This method will take a few days to strip the rust away. You can find molasses at most produce stores. Simply fill the container enough to cover the rusty item and produce a 9:1 ratio (nine parts water to one part molasses).

Here’s a top tip for you: before you dunk the rusty gear into the solution, tie some fencing wire around it so you don’t have to put your hands in the solution to get it back out – it’s nasty stuff! Then give it a wash in fresh warm water and season it properly before use.

If there’s no wood around or you can’t have a campfire, one very effective method of cooking is to use heat beads. Simply light the beads up and let them burn down to ash for a good half an hour or so. Then, it’s simply a matter of placing the camp oven on top of a few coals, and placing a couple on top too. For a cooking temperature of roughly 180°C, place about 9-10 coals underneath and roughly 14 on top. Obviously this depends on a few factors, but it’s a good basis to start with.

All this talk about cooking with cast iron is enough to give anybody the munchies! If you love your camp cooking, and don’t mind chowing down on a cracking campfire feed then right now is the perfect time to breakout the old cooking gear, freshen it up and head bush for a few days. Sure you’ll probably stack a few kilos on in the process, but life’s too short – eat dessert first!

The full feature appeared in Camper Trailer Australia #111 2017. Subscribe today for the latest caravan reviews and news every month!