Welcome to the West Coast of Tasmania. It’s wild — thanks to wet and windy weather — has winding roads, winsome towns, wonderful waterfalls, whimsical wildlife, and wow is it beautiful. Most of the west coast’s climate results from being located between approximately 40- and 50-degrees latitude, in the middle of what’s known as the ‘Roaring 40s.’ This region is characterised by strong westerly winds, which bring along with it cold and wet weather. On the upside, it also contributes to the unique ecosystems and biodiversity found in this part of the state.

After getting off the ferry in Devonport, the most logical direction to head is north-west. Be sure not to miss all the delightful stops along the north coast, stopping in at Smithton as a final point to stock up before continuing to the Arthur-Pieman Conservation Area. For the avid meat-eater, head into a local butcher to pick up some Cape Grim beef — it’s a local delicacy. From Smithton, there are a couple options from which to base yourself to explore the area: for more amenities, a caravan park and several national parks campsites can be found in and around the small town of Arthur River. If free camping is more your style, there is a fantastic self-contained camp located in Marrawah at Green Point Beach. 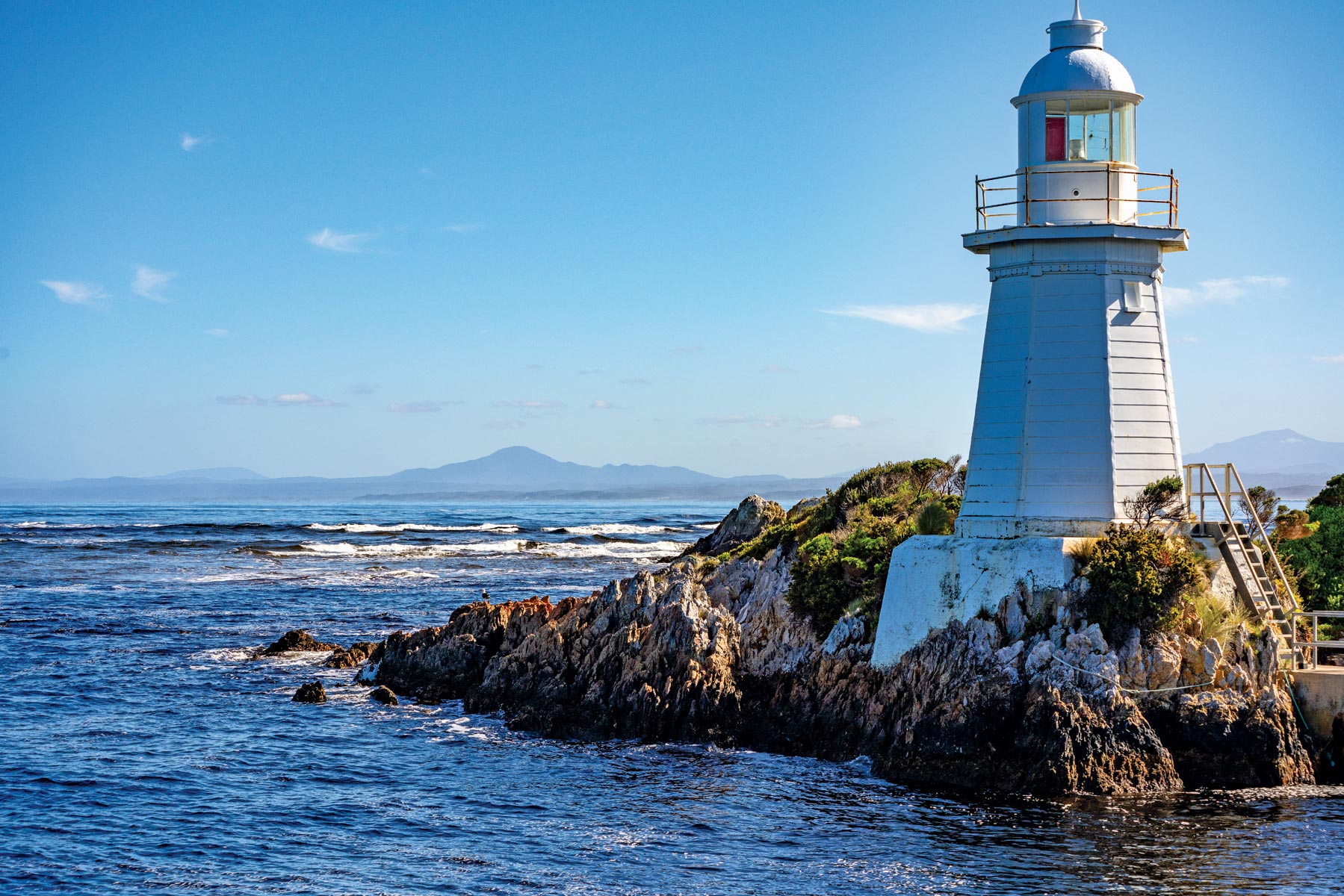 The points of interest in this region can be broken up into two sections: Arthur-Pieman Conservation Area and the Tarkine Scenic Drive. Both can be done as a large loop in a day but are best explored separately over a minimum of two days. The Arthur-Pieman Conservation Area showcases rugged coastlines, Indigenous heritage, and shack communities. After a quick stop at the Parks Office to pick up a pass if you haven’t already, cross the Arthur River bridge and make your way to the Edge of the World to see this wild coast up close. Couta Rocks has some interesting ruins situated amid the weathered fishing shacks still in use to this day. Other tracks off the main drive lead to various fishing communities and Indigenous cultural sites such as middens and rock carvings. Continuing further south, you’ll find plenty of four-wheel driving tracks, including one of the most notorious in all of Australia — the Balfour Track. Thanks to the Roaring 40s and the wild weather it brings, this track is rarely ever dry, meaning it’s extremely boggy; a winch and snorkel are required and travelling in convoy is highly recommended, bordering on necessary. If you’re keen to tackle the Balfour or any of the tracks in the area, a recreational driver pass is required. The other highlight of north-west Tasmania is the Tarkine Drive, located inland from the Arthur-Pieman Conservation Area. The Tarkine Wilderness Area covers an area almost twice the size of the ACT and is the second largest temperate rainforest in the world. There are small campgrounds along the drive, but we recommend still basing yourself nearby and making this a day trip. Could you take a caravan down this drive? Probably. Are you going to enjoy it significantly more without towing? Definitely. Most stops along the drive are easily accessible and offer fantastic glimpses into this remote wilderness. Coming from Arthur River, Kanunnah Bridge is an excellent photo stop before the road climbs to Sumac Lookout, which is an easy 5- minute return walk to a stunning lookout over the Tarkine. The Julius River stop offers two enchanting rainforest walks, while the lookout at Dempster Plains showcases the buttongrass plains so iconic of this part of Tasmania. Depending on the time of year, Tayatea Bridge can be a good place to admire smatterings of colourful wildflowers such as the bell-shaped foxglove (Editor’s note: this plant is listed as an environmental weed in Tasmania, New South Wales, and Victoria). Last but certainly not least is Trowutta Arch, a short rainforest walk leading to a natural rock arch framing an intriguing green pool. If you have more time, there’s plenty to explore en route.

The Edge of the World Hidden Gems Along the Way

To continue to Zeehan and Strahan, it is highly advisable to backtrack via the main highways east towards Burnie before heading south. While there are other roads that connect Arthur River to these southern towns, they are narrow and winding country roads that are not ideal for towing, and the journey includes a ferry that can only carry smaller rigs. Be sure to stop again at Smithton or Wynyard to restock — options for supplies become more limited once you continue. While this leg of the trip can be done in a day, there are numerous stops along the way that are worth factoring into the itinerary.

Waratah is a delightful town approximately halfway between Wynyard and Zeehan. It has an impressive waterfall in the middle of town, an adventurous walk to some lower falls, and an old hydro station (ask the locals for more information) as well as plenty of interesting history from the town’s proximity to what was once considered the world’s largest tin mine. It is a great place to spot the elusive platypus in or around the town lake, particularly at dusk and dawn. There’s also nearby Philosopher Falls, where an hours’ walk through the rainforest leads to an impressive waterfall gushing out from the lush vegetation. Moreover, Waratah can serve as a useful base to explore the Cradle Mountain region. Another great stop along the drive to Zeehan is Lake Mackintosh, located 50 kilometres south of Waratah. Tasmania is renowned for its free camps and this one is certainly a highlight, featuring beautiful lakeside camping, amazing scenery, and opportunities for fishing, kayaking, and boating. For the hiking enthusiast, there are several spectacular hikes in the area, such as Mount Murchison — the highest peak on the West Coast at 1275 metres. It is by no means an easy track and is not recommended to hike on a wet day, involving near continuous uphill climbs and some scrambling and rock climbing (no equipment necessary, though). It’s also not unusual to see snow here, even in the middle of summer! If the hike to the summit doesn’t leave you breathless, the views certainly will — prepare to be rewarded with 360-degree views of rocky peaks, glacial lakes, and man-made waterways as far as the eye can see. TOWNS OF A BYGONE ERA

The next town from which to base yourself is the old pioneer town of Zeehan. Once a booming mining settlement that was the third largest town in Tasmania, Zeehan has become a bit of a relic, and there’s no better place to experience this town’s rich history than at the West Coast Heritage Centre. The centre includes four historical buildings: the post office, theatre, court, and school of mines, along with multiple other exhibitions. Close to Zeehan is located the tallest waterfall in Tasmania: Montezuma Falls. This impressive 104m-tall waterfall is accessed from the north via a gravel road and 11km return walk along a former tramway, or from the south via a 4WD, dry-weather-only track. Don’t miss an exciting trip out onto the suspension bridge! Lastly, another fantastic day trip from Zeehan is to the tiny town of Corinna along the Pieman River. Coming south from Zeehan, you’ll need to take a ride on the charming ‘Fatman’ Barge. Unless you plan to venture further than the township, you can leave your car on the opposite side of the river and cross as a pedestrian for a lower cost. Camping is available here, but only to those with smaller caravans as there is a length restriction for the barge. Once at Corinna, there are several activities to choose from. There are plenty of walks ranging from short strolls through the historic township to several hours through pristine rainforest and Huon pines. Exploring the Pieman River further is a must; this can be done either via kayak for a half or whole day, or aboard the historic ship Arcadia II. Otherwise, the delightful Tarkine Hotel is an ideal spot for a tasty pub meal and a yarn with fellow travellers. Moving on from Zeehan is the lovely seaside town of Strahan, founded in the 1870s as a port access for the region’s mining settlements. For such a small town, there is an abundance of activities available. The most popular tours are the West Coast Wilderness Railway and a cruise down the Gordon River. Day cruises usually set sail through Macquarie Harbour and include a visit to the rough seas aptly named ‘Hell’s Gates’, a serene voyage along the Gordon River and through World Heritage-listed forests, and last but certainly not least, a tour of Sarah Island, one of the most notorious penal settlements of Australia. Top off the day by seeing the longest-running play in Australia, The Ship That Never Was. This interactive play, which has been running since January 1994, details the incredible (and true) story of the escape of four convicts from Sarah Island. It’s good fun for children and adults alike. Lastly, if you haven’t yet seen a platypus, Hogarth Falls can be a great place to see one as they are frequently spotted along the waterways here. Hells Gates as seen on the Gordon River Cruise

Hopefully by now you’re accustomed to Tasmania’s winding roads because the next section of road is known as ‘The Road of 99 Bends’, a tortuous drive that will certainly test your nerves! The trick is to take it slow, keep your eyes on the road ahead for oncoming traffic, and use your UHF to communicate as needed. Luckily, there are several stops along the way to break up the journey. The Iron Blow Lookout has great views over an old open-cut mine and informative signs regarding the fascinating and troubled history of the mining town of Queenstown. Nelson Falls offers a short, easy rainforest walk leading to an impressively tiered waterfall, and the Donaghys Hill Track is a gradually inclined walk ending in impressive views. The town of Derwent Bridge makes for a perfect overnight stop, with a fantastic free camp at Lake King Williams. From here there are several options for continuing your journey: you can head north to Launceston, south to Hobart, or wander through Tasmania’s Midland region. The infamous “Road of 99 Bends” from Queenstown to Derwent Bridge

Many visitors to Tasmania tend to leave the West Coast out of their itinerary, but in doing so, they miss out on a spectacular landscape not found anywhere else in Australia. If you’re looking for less crowds, remote and pristine scenery, fascinating history, and encounters with wildlife, the West Coast offers all of this and much more. Philosopher Falls, only a short drive from Waratah

Tasmania is known for its unpredictable weather any time of the year, so be prepared for all climates. The Roaring 40s tend to peak in both spring and autumn, while winters bring cold weather in the form of freezing overnight temperatures and snow. Summers usually offer pleasant, warm days and cool nights.

Smithton, Wynyard, and Burnie in the north-west are the largest towns along this itinerary with the most choice for food and fuel. Smaller towns such as Waratah, Zeehan, and Strahan have more limited options. Keep in mind that fuel consumption will also be higher in this region due to the hilly roads.

PLANNING YOUR NEXT BIG ADVENTURE

WHY ARE FUEL, POWER AND WATER ESSENTIAL FOR FREE CAMPING?