The hardest part about deciding what camper trailer suits you the best is actually understanding what to expect from a particular style of camper trailer. Some setups have their quirks while others are more suitable to a particular style of camping. To be truthful, not many people can brag that their campers are absolutely 100 per cent perfect for their application, there’s always some sort of compromise. But just when you think you might finally have it right, life circumstances change and make you re-think your entire setup... or so history has proven!

With all that in mind, we thought we’d take a closer look at the different styles of camper trailer available to the modern day camping enthusiast, to find out what style suits who as well as expose of few of those nitty gritty details you usually work out after you’ve laid down your hard-earned cash!

The humble hardfloor camper has been a crowd-pleasing favourite since, well, forever! Its quick and easy flip-over design is simple to use, and having a solid floor keeps you up and out of the mud, which adds some insulation too. You don’t really have to clear your campsite of little rocks and branches before you set up camp, and they’re also quite tolerable to uneven ground. Storage space is adequate for most couples or small families as most models utilise a storage box on the drawbar. The downside is you’ll find internal living space can be quite limited, compared to most softfloor camper trailers, anyway. This is generally overcome with the use of a nice and spacious awning but it means you can lose the benefit of a super quick and easy set up if you always need the extra room. On the flip-side, the solid floor means the chances of tripping over a canvas ripple are totally eliminated. 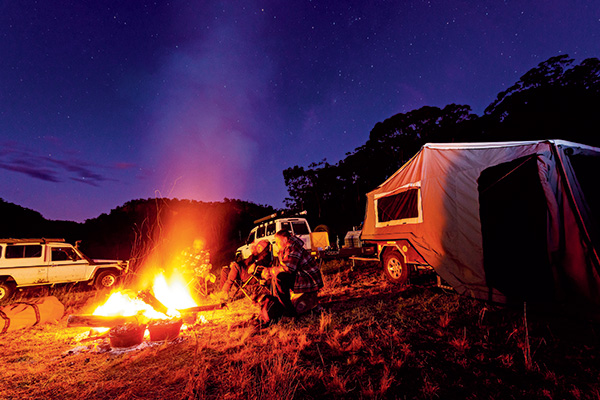 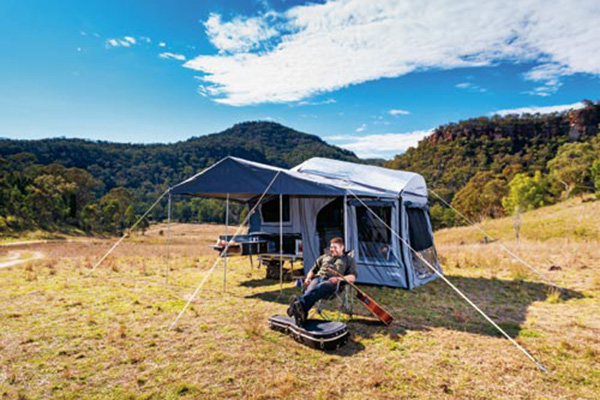 When Darren Smith from New South Wales chose his, the setup seemed very easy but in practice he finds the latch on the middle pole in his camper difficult to adjust as it is so high. He found that the tent was heavy to lift on its own, which he worries could cause a problem if the winch was to fail. He also noticed a difference when towing in certain offroad situations.

“The heavier ball weight of this design seems to make our 4WD’s rear wheels sink down into the sand more than my last camper trailer did,” he said.

He said that it did save on mess, though, as most of the dirt and sand falls off his feet before stepping inside, and that it was easy to access the kitchen from the side of the road.

Next time, Darren said he’d choose a camper that doesn’t require any internal pole adjustments, and would consider a forward-fold model, which has a lounge inside.

Before handing over any money, Darren said prospective buyers should look at a “heap of models” first, as there are big differences between the different hardfloors.

Many softfloor campers offer good value for money but there’s a little bit more time and manual labour involved. One of the best things about the softfloor is the vast internal living and storage space they provide. Yep, having the tent on top of the trailer means you’ve got the entire tub of the trailer to fill up with stuff! And that big tent will usually fold down to a fraction of its setup size. Plus, some of these tents simply bolt on or off, if you wish to update or ugrade to a new design. The same goes for storage drawers and kitchens. In fact, their simple nature makes them very DIY-friendly.

If you need somewhere to stash your family’s camping gear, a softfloor camper might be go. It takes Terry and Nicole Grima 40 minutes to set up theirs, but Terry reckons it’s easy enough, and the benefits are worth the effort as they tend to camp in the one spot for at least a few days.

“The tent is huge and fits everybody inside with room to spare. It’s perfect for the kids on rainy days,” said Terry.

The one thing they hadn’t anticipated was dealing with the canvas once it’s wet.

“It’s also a pain to dry it all back out, if you don’t have room in your backyard.”

When purchasing a softfloor camper trailer, Terry suggested that buyers choose a softfloor that has gas struts to help fold up the tent, as well as the bed base.

“Also, remember, the higher the camper, the harder is it to climb into the bed,” he said.

These bad boys are becoming a very popular option, mainly because they’re incredibly comfortable. While a good offroad hybrid camper is more than capable of touring practically anywhere, the extra weight, higher centre of gravity and overall height can restrict you a bit in terms of capability. In saying that, the level of comfort they can provide along the way is nothing short of a home on wheels. These things really come into their own during wet, windy, cold and overly hot weather thanks to the four solid walls. In terms of layouts, these hybrid-style campers are a dead-set open book. Yep, they’re definitely a set up to suit just about any sort of camping enthusiast, and it’s that same versatility that is making them an extremely popular choice these days.

A LIFE ON THE ROAD

When you’re for preparing for a life on the road, where your camper trailer serves as your home base, you really need to take stock in the kind of comforts you need.

Samantha Gray and her partner chose a hybrid for that very reason, and she really likes the security it offers: “You’d be surprised how often you have to camp at caravan parks where theft can be a problem if you don’t have locks.”

According to Samantha, setting up the camper takes very little time, which makes it convenient for quick road-side naps.

“The air-conditioner works well with the insulated walls, too.”

Although there have been no major surprises, Samantha said she has bumped her head on the entry door many times due to its height. The long-haul traveller admitted she likes the idea of an internal shower, adding that next time around they’d probably “step-up into an offroad caravan”.

Before choosing a hybrid camper, Samantha suggested prospective buyers look for one with enough ground clearance to go where you need to.

“Ours does limit us sometimes, mainly with steep entry or exit points to campsites. A good wedge tail for increased departure angle should do the trick.”

Roof-top campers are ideal for on-the-go touring, where quick overnight stops are your thing. Yet, a well setup model can equally be a home to live out of for months at a time! These campers are usually featherweights, with an emphasis on exceptional offroad performance. One popular feature is the accessibility right around the trailer, both during transit or when fully set up at camp. While they can get a bit top heavy at times, most of these campers have a pretty decent centre of gravity, but nearly all require climbing up into the main bed. Models with basic roof-top tents will struggle to accommodate kids, especially young ones, but many manufacturers have developed custom tents to make them more practical.

If you’re reasonably fit but could do with a few more comforts on your hard-core offroading expeditions, a rooftop camper might be the go.

That’s exactly what Dean and Stacey Pieman found when they were searching for a super capable rig to drag across the top end. The couple have saved on fuel due to its lightweight design and feel less restricted in their travels.

“There’s loads of storage and everything is easy to get to but the beds go a long way up, especially when you try and get your three-year-old son up there!” Dean explained.

Dean reckons he’ll keep it until he “keels over” but is quick to add that prospective buyers should look for one with a proper custom tent.

“And make sure it’s not too high to reach when you’re setting it up”.

Check out the full feature in issue #109 of Camper Trailer Australia magazine. Subscribe today for all the latest camper trailer news, reviews and travel inspiration.