Gordon saw it first. “Eyyy, that’s a shop!” he said in a Scottish brogue so tough 20 years in Australia hadn’t knocked its corners off. The building he pointed out was low and flat-roofed, concrete blocks painted in sun-faded colour. There was a doorway up front with a barred door swung open and a dusty window hiding what might have been a display of cans and bottles.

“Oh, thank heavens,” I said, hanging out for something that wasn’t meat or alcohol. Our South African hosts were the most incredible bunch and couldn’t do enough for us, but by eight days later, I’m thinking vegetables and fruit in Afrikaans translated to ‘chicken and sausage’ at best. “Let’s go, mate!”

Gordon pulled the Sorento over and parked under a leafless tree. I looked around at the clay tracks, stick fences and grass huts dotted with the odd bit of tin and figured the leather upholstered air-conditioned Kia might be a tad out of place. But Africa is all about contrasts – signs of life everywhere but here in the middle of the day, no life to be seen. 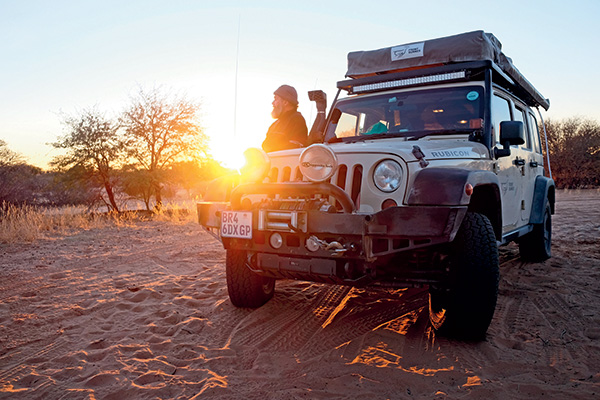 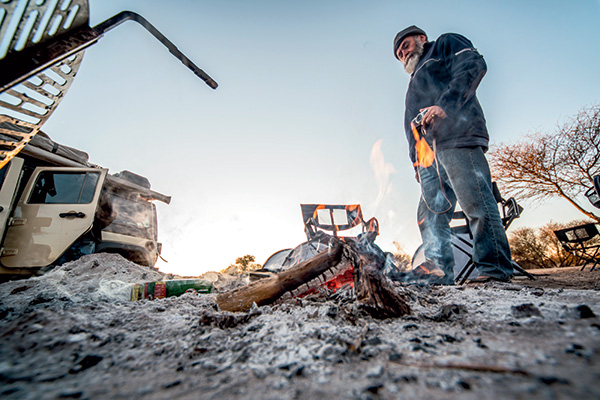 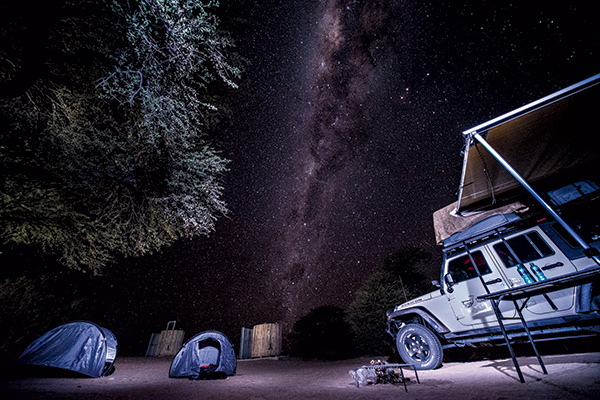 Inside, the ladies behind the counter seemed to shy away at first while a couple of local kids sucking ice blocks just looked up with wide eyes that said it all. But Gordon cracked a smile and so did I and there’s nothing quite like grinning to break the ice. I went looking for veggies and turned up a basket of sweet potato looking things. Wasn’t chicken, wasn’t sausage; I’ll take the lot, please.

Even as I’m writing this I’m thinking: hypocrite! Fact is, a few days earlier in another, bigger town, Jaco had taken us to a biltong butcher and we’d bought enough dried meat to equip the British Army for a month. Here in Australia, our nation kicked off on a diet of salted pork and beef because that’s what the Royal Navy provisioned its ships with. Properly done, rubbed with salt and then soaked in thick brine (one old convict recipe had four pounds of salt per gallon of water) to remove any blood and then barrelled up with more salt again, meat could stay edible for months in those pre-refrigeration days

Dried beef ‘jerky’ has also been around in Australia for a long time, although the name jerky came over with Americans chasing gold during our rush days. However the big difference between our dried meats and the South African’s biltong is that Aussie jerky is usually flavoured pretty heavily – you should try my sweet chilli jerky – and process dried over eight hours or so, whereas biltong is cured using vinegar and aged for anything up to a week.

So, good biltong is all about the quality of the meat to begin with and the way it’s processed. It’s a point of pride to South Africans and judging by the way neither Gordon or I could go more than a few minutes without breaking out another slab for a munch, it’s possibly the most ‘moreish’ snack on earth.

I was hanging out for some vegetables, though, so with my bag of sweet potatoes tucked behind the seat of the car I started planning how best to cook them. That was probably silly because the only cooking utensil we had was the FrontRunner ‘braai’, the aluminium barbecue plate designed to slot over the spare wheel on the back of your car.

There are a few things I’ve already noted from this trip that will do very well for our Aussie outdoor lovers, but given our own love for barbecues I reckon this product is a sure-fire winner. The worst thing about storing any barbecue plate when travelling, is that you wind up with black over everything packed close to it. Then, if it’s left out in the rain or packed wet, chances are it’ll rust unless you’ve carefully oiled it.

So to have an aluminium plate ready to unclip off the spare wheel, that just needs a scrub when you’re done, is very clever. The legs double as the clips and everything is adjustable to suit most spares this side of an Alabama monster truck.

I got to appreciate it again that night when we caught up with the team and got ready for another braai. This time I sliced up the sweet potato and fried it with some butter – beautiful, and surprisingly popular!

Clever people our South African cousins, and boy, do they love their great outdoors. I was there to test products for suitability in our Australian market and while I know there are a lot of things we do better to suit our own conditions, there’s an awful lot we can learn from them, too. The FrontRunner roof rack system comes in with flying colours. Lightweight, strong, you can walk on it barefoot and there are clever kits available to adapt it to carry anything from a canoe to an axe or a water tank to a tent.

Or a potjie bracket to hold your cooking pot safely on the roof. I loved using the three-legged cast iron potjies so much I’ve just taken delivery of one, along with the necessary bracket to hold it on Milo’s roof. My wife reckons the Dutch-sourced cooker looks just like a witch’s cauldron, but it’s destined to be a permanent part of my camp cooking clobber from now on.

As is the under-rack table system. What’s the first thing you need when you set up camp? A table. And where is it? Being flat, probably packed under everything else. But FrontRunner has got around that by coming up with a very solid table that fits under the rack so you can slide out your table before even contemplating what’s for dinner.

And that’s what I’m doing right now, so I’d better finish this and go. I just hope she’s not using my potjie again. Ever since that crack about witches, I’m wondering what part of the cane toad she’s dropped in there this time.

See you up a track some time...