When it comes to towing a bunch of different camper trailers up and down the super soft sand of Bribie Island, you’re pretty much guaranteed to get bogged at some point or another. And during our latest antics at the Camper Trailer of the Year contest there were more vehicle recoveries than pimples on a teenager’s face. However, we had an ace up our sleeve to ensure we didn’t getted bogged down for too long: introducing the Vehicle Components Recovery Team!

VC operations manager Andrew Goddard, and development manager Tim Elcock and their vehicles were in full flight over the course of the week, and we’d be lying if we said they weren’t absolute lifesavers. Their knowledge in the fields of 4WDing and offroad recoveries is simply impeccable, and they were only too happy to lend a helping hand, not only with the Camper Trailer Australia crew but to our 14 entrants as well.

WHAT IS VEHICLE COMPONENTS?

You’ve no doubt heard of Vehicle Components (VC) but did you know that VC is behind some of the most trusted and relied upon camper and trailer products on the market? 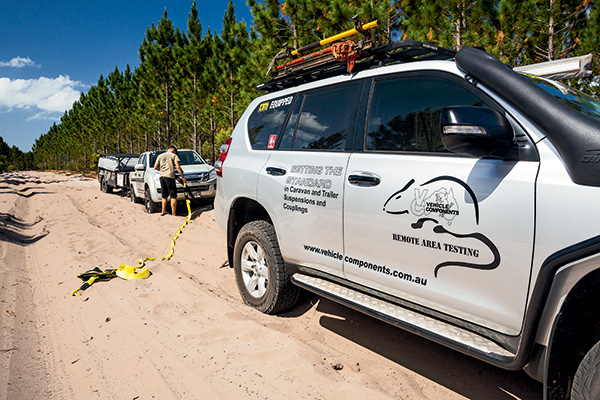 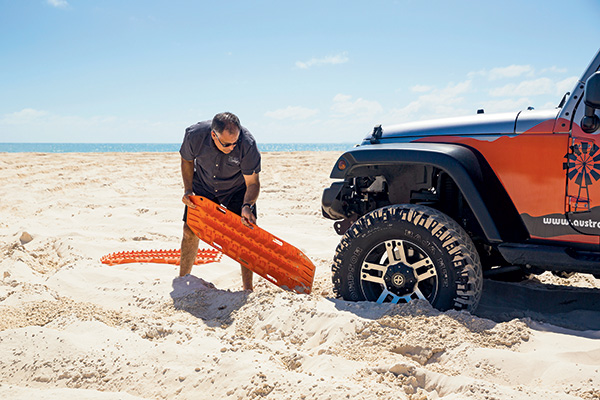 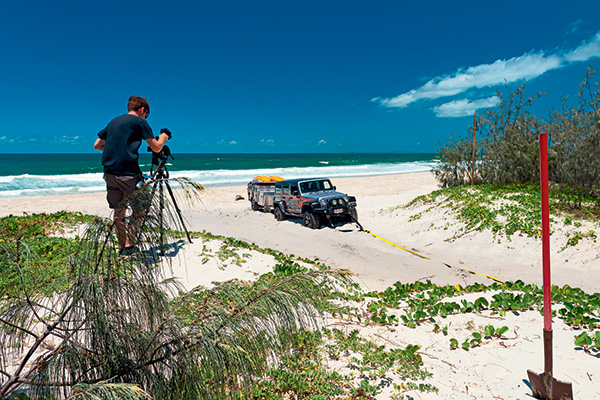 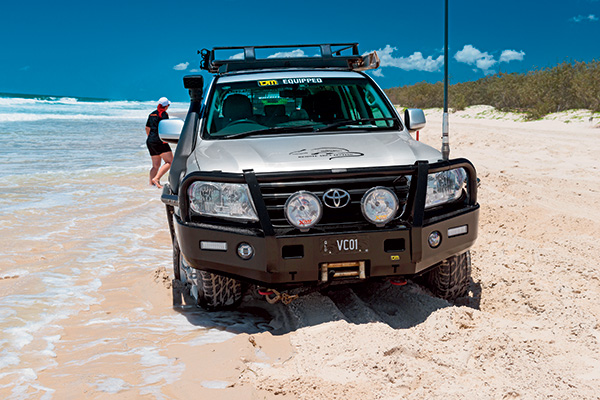 Brisbane-based VC has been around for almost 40 years and has designed and developed several different market-leading products and brands including the Cruisemaster independent suspensions, Hitchmaster couplings, Ridemaster leaf suspensions, Shockmaster superior damping systems and Liftmaster slimline stands. These products have had years of research, development and testing done all over the country and Vehicle Components has built itself a solid reputation among some of the most respected manufacturers in the country. The bottom line is, these guys know their stuff!

During the Camper Trailer of the Year event, the Vehicle Components Recovery Team spent most of its time tagging along as support vehicles on the beach, and working on their tan; tough gig, eh?

But as easy as it all sounds, Andrew and Tim definitely had their work cut out for them, and VC’s MD Andrew even got involved! They were in charge of getting over a dozen camper trailers through our beach and inland test tracks unscathed. And that’s no easy feat when you consider the sand was as soft as a tub of Milo and milk, and the tide took over the beach whether you were stuck on it or not.

But there’s not much a team of Toyotas and a couple of canny blokes can’t do, is there? The vehicles of choice were two of the best made vehicles around – the mighty Prado and its bigger brother; the 200 Series LandCruiser. Both models are extremely capable for this kind of work, and they’re the same vehicles the company used in its annual offroad RAT Run!

Recovering any vehicle can be potentially dangerous due to the forces that are involved, but soft sand adds a heap of resistance during a recovery which makes things even dicier.

As your vehicle sinks down, sand builds up in front of the tyre; add more than a tonne of camper trailer to the mix and you’re playing with much higher forces than in a standard recovery.

That’s exactly why the Vehicle Components Recovery Team carried a few traction aids such as MaxTrax on board. These little beauties are the best thing since sliced bread when it comes to recovering vehicles on the beach. Not only do they help your vehicle recover itself without the need for another vehicle; they rely on increasing traction to get the job done, instead of pulling forces like a winch or snatch recovery. That means there are less loads, forces or strain required during the recovery, and less risk of something going wrong.

In fact, even if these traction aids can’t completely recover a vehicle, in most cases they’ll give the tyres a solid platform to roll on without sand building up in front, which helps reduce the resistance during a winch or snatch strap recovery.

The guys also carried a TJM recovery strap kit as part of their essential recovery gear. It’s worth noting the use of equaliser straps wherever possible too. Using an equaliser strap effectively splits the load between the two different recovery points on the front of the vehicle, which basically halves the strain on each point. This is a big win when you consider the forces that are applied when you’re recovering a vehicle with a camper trailer, especially on sand.

It’s also worth noting that, in these recovery scenarios, it’s often the little things that make the biggest difference. Things like pointing the vehicles downwards so you’re not trying to climb your way up a crest, or heading straight for the harder sand so the vehicle doesn’t have to work as hard. Things like following any existing wheel tracks can make things easier, too, as the sand is already compressed under the tyre which helps reduce the amount of digging the tyre has to do to get traction.

TYRE PRESSURES FOR TOWING ON SAND

Having the correct tyre pressures is crucial for driving on soft sand. The idea is to let air out of the tyre to increase the tyre’s foot print so more tread touches the ground. Why do we want this to happen?

The idea is a wider foot print allows the vehicle’s weight to spread over a larger contact, allowing the tyre to float over the top of the sand instead of digging down, which inherently creates resistance. It’s important to adjust each tyre including your camper’s tyres to suit the terrain.

Now, the big question; what tyre pressure should I run? Well, there are actually quite a few factors to consider, which include the type of tyre you have, the weight of your setup and speed you will be driving. As a general rule, though, around 18psi should get you out of trouble in most beach driving situations.

However, for really soft sand going a bit lower can definitely help too. Care must be taken when driving on low tyre pressures as stability is compromised and tyres can come off rims.

When it comes to product testing, the guys over at Vehicle Components have got things well and truly sorted. Rather than just testing things inside a workshop, they head off on an annual RAT Run, which is short for Remote Area Testing. This is where the products get tested under extreme ‘real life’ conditions to ensure they’re reliable and 100 per cent up to the task. Places like Central Australia and Cape York have been the testing grounds for VC products over the years, with the idea being these products are tested over long distances, and under all types of road conditions to check for strength and performance throughout Australia.

As fun as this all sounds, trust us, it’s not all beer and crackers on these trips! Comprehensive testing is done throughout the entire trip. In fact, they go as far as building custom test trailers, and fitting them with MoTeC data logging equipment to record what is happening to the suspension/coupling over different surface conditions in real time. Information such as shock absorber temperature, suspension position, vehicle speed and G forces on the trailer is stored, and analysed down the track.

After a week of watching the VC Recovery Team pull vehicle after vehicle out of the sand, it’s pretty safe to say the crew at Vehicle Components not only know exactly what they are doing out on the beach, but they have a heck of a lot of fun while they’re at it.

The team’s competence in offroad driving and recoveries also illustrate the expertise and passion at Vehicle Components for offroad travel, which shows through in its innovative and durable suspensions and couplings.