Can you believe it? A Lego-inspired camper trailer!

Lego was the foundation – or the ‘building blocks’ – of the WA-based Follow Me Campers’ Pentecost.

Follow Me owner George Minaides came up with the brainchild for the Pentecost, which is based on his Argyle design, while watching his sons, Nathan, 11, and Jason, 9, playing with a Lego set. 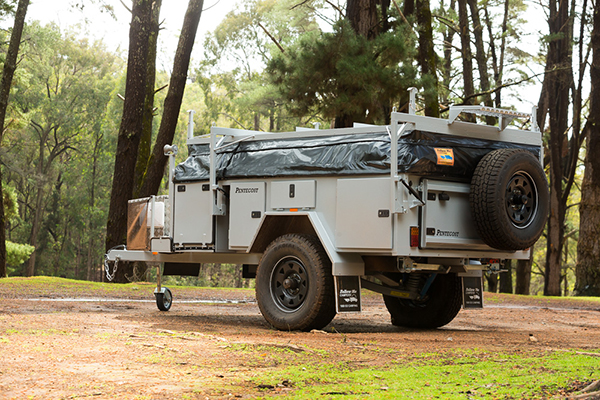 A lateral thinker, George assembled a ‘car’ and hooked up a ‘side-fold camper’ from the Lego blocks and towed his virtual rig around the room. He says his idea for the Pentecost was “how I wanted to pivot it”.

The Pentecost (named after the Pentecost River in WA’s Kimberley region) was born and the rest is history.

CTA reviewed the side-fold hardfloor camper in the serene Darling Ranges, south-east of Perth. We put it to the test in the picturesque jarrah forest of Lane Poole Reserve, just out of the charming township of Dwellingup. And the striking silver pearl-coloured Pentecost had no difficulty blending in with the environment. It also tackled the terrain with aplomb.

There were many aspects of the Pentecost that impressed me, but an obvious standout was the effortless set up and pack up. George’s wife Teresa proved it was a one person operation by utilising a hand winch with a 5:1 ratio. And with the gas struts assisting, it was a breeze.

The stress-free stakes were also highlighted by the configuration of the camper’s cover – you can unzip the bottom section without the full vinyl curtain having to come off. It’s a no-brainer for overnight stays. George said he also offers an optional speedy awning which covers only the kitchen bay. It only requires two poles and a rope to set up, and is amazingly when you’re travelling long distances between destinations.

Built to more than handle the rough-and-tumble, the Pentecost’s body is 1.6mm Zincanneal while the drawbar and chassis are 100x50mm galvanised RHS and 75x50mm galvanised RHS respectively. It also rides on a tough independent Gaffa suspension, 12in electric brakes and 17in Kumho tyres offset to match the vehicle. It really has fantastic resilience considering it’s Tare of 1300kg, which comes with a healthy payload of 700kg.

And the large lockable aluminium toolbox (1500x550x500mm), with a capacity of more than 400L, is a beauty. It also sits in front of four jerry can holders and behind a stone shield. Storage is certainly not an issue as the camper also has a full-width carpet-lined tunnel boot and the roof (when packed up) also has a 90kg capacity, which is enough to hold a 3.8m boat.

I’m a fan of the permanent solar blanket over the roof for a couple of reasons – no debris, bird droppings or similar can land on the roof, and it’s better suited in windy conditions than a fly, as it sits flatter and doesn’t flop around.

The camper has sufficient hot water courtesy of an Atwood 22L storage unit and shower box at the front and flick mixer in the kitchen, where a pressure pump runs at 11L per minute.

There’s no doubting the Pentecost’s durability, which is enhanced by a 15oz canvas tent, walls and roof, and it’s definitely not found wanting in the cooking department. The rear slide-out kitchen, which has three compartments, comprises a Thetford four-burner and grill with integrated sink. There’s a slide-out above the cooktop and sink which houses a huge pantry drawer that’s ideal for plates and cutlery; in fact, the contents would fill a 70L crate. And the storage underneath the sink measures 400x1000mm.

Also at the rear is a slide-out for a 60L Engel fridge (or room for a 70L crate of food), a spare wheel and lighting above the rear drawer.

Meanwhile, there are compartments on the driver’s side for sullage hoses, tent pegs, hammers and so on. And twin 4kg gas cylinders are located in a hatch at the front. A longer drawbar also means the Pentecost is Pajero- and Prado-friendly given their single opening rear door; it’s so much easier to back on to the coupling.

Follow Me Campers has come up with a doozy. There isn’t much missing on the Pentecost; it really has all the bells and whistles.

Even better, this robust and snug camper will take you anywhere the travelling heart desires – in total relaxation. And you get the best of both worlds – abundant storage and a hard floor.

The Pentecost brims with creativity and initiative. And, in my humble opinion, it proves how invaluable a Lego set can be!