The setting up and detailed reviews on Kelly Campers

First impressions don’t always reveal the inner nature of things. Such is the case with the Kelly Campers Glenrowan II.

When we first viewed it prior to judging, the Kelly Glenrowan II appeared to be an unassuming grey box but, as we climbed through it, over it and under it, we began nodding our heads and murmuring complimentarily.

Kelly Campers’ reputation is burgeoning in the camper trailer world. The Bundaberg, Qld-based business has fabricated aluminium and stainless steel for more than 15 years but only set out two years ago to design and build a hybrid camper for company owners Dave and Di Willoughby. Their criteria were simple: Australian made, tough, simple to use, light and secure. 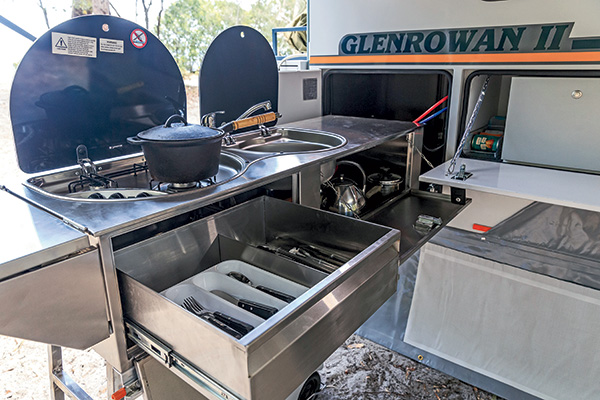 Careful planning and a qualified team (including certified aircraft and pressure pipe welders) produced results that exceeded the original plans. More than 40 years of real camping – including experiences with a softfloor camper – along with CAD expertise has enabled Kelly Campers to produce a steady stream of campers for discerning camper trailer fans.

The company’s name was inspired by Willoughby’s once-full-bearded features, which earned him the nickname ‘Ned’. The association also inspired the model names Glenrowan II and Greta.

It sits on a 100x50x3mm DuraGal powder-coated chassis with a tough 150x50x3mm drawbar extending to the suspension. At CTOTY, it was riding on Kelly’s own airbag suspension, however, all new models will feature the all-new Vehicle Components Cruisemaster XT Air suspension, with remote reservoir heavy-duty shock absorbers and a level three air kit, affording great clearance and levelling options at the flick of a switch.

The Glenrowan II comes with removable hubs and AL-KO air-over hydraulic disc brakes, which the Kelly team feels are better in fine dust conditions, reflecting the company’s origins in the north of the country. The rims are 16x8in alloys with 285/75 R16 mud terrain tyres, the jockey wheel is the excellent dual wheel Ark XO and the hitch is an offroad coupling.

The drawbar is topped by checkerplate aluminium for access to the storage rack on the front box two 4kg gas cylinders. I imagine a small extension either side would suit trail bikes or provide storage for firewood; custom racks are available on request. The camper we saw came with a Stone Stomper stoneguard for optimal protection from rocks.

The body is all built on a 25x3mm fully welded aluminium frame, with a 2mm aluminium sheet external skin and a continuous 3mm aluminium floor panel. The roof has extra box sections to support the optional air-conditioning unit. The 3mm composite inner walls retain 25mm of Styrofoam insulation.

The frame design helps keep the weight down to just 1100kg Tare, and with a GTM of 1900kg that gives an impressive load capacity of 800kg.

The roof on the Glenrowan II lifts with four 12V actuators activated by an enabling switch, which you need to press down on until the job’s complete for about two minutes. This may feel long if, say, a storm is approaching but you can still open the back door and shelter inside while raising the roof.

Externally, a 1930mm 316-stainless steel kitchen slides out from under the bed. It features a fold-over extension for preparing food, a three-burner Smev stove and sink combo and a large storage cavity and cutlery drawer. The stove’s gas connection attaches to a bayonet fitting on the top of the front box, and in transit is neatly wound up on two plastic clips on the back of the kitchen.

The mixer tap is plumbed to the 150L 316-stainless steel tank and the connections for the Smarttek 6 instant gas hot water system (HWS), which hangs to the exterior of one of the driver-side lockers. The tank is located under the bed, to keep the water cooler in hot conditions freeing the underneath of the camper for better fuel consumption.

The HWS travels in the front box, along with a portable 28L Fiamma grey water cartridge on wheels for catching water from the kitchen sink.

The box also stores an aluminium tray which acts as a grey water tank and the floor for an external shower. This tray is 960mm long but only 560mm wide, in accordance with the roof of the shower that flips up from the rear driver’s side. This seems tight for a shower. I would prefer to see this space widened with arms for the vinyl walls. That said; the Glenrowan II is only one of two campers seen at Camper Trailer of the Year that addresses the pressing issue of water disposal.

Next to the kitchen is the pantry, with one deep and two shallow drawers behind a fold-down door, providing more space to prepare food. All external doors (including this one) are double skinned and secured with two compression locks to ensure the pinchweld seals work effectively. Immediately behind the pantry is the 104L Waeco upright fridge hidden behind a fully removable door for easier access. Two LED lights along this side of the camper provide illumination for meal preparation at night.

On the driver’s side there is a long storage bay for storing the porta-potti supplied, with plenty of extra room for other items, and a higher but shorter storage bay that looks a practical size.

The kitchen and rear door are sheltered by an L-shaped Supa-Wing awning that uses just five poles and seven spreaders. It can be self-supporting or pegged down in extreme weather. There is also a draught skirt, which has a handy pocket next to the rear door for your boots, a mesh section for airflow if all the walls are in place and a very large pocket under the kitchen. This latter might be better if it was subdivided. Walls are optional, and customisable, in mesh or solid and in one or two sections.

To access the rear, drop down the spare wheel to form the sturdy checkerplate step but take care not to bang your head on the low overhead.

The internal space is a little cramped but cosy, with a 1920mm-long queen width innerspring bed. The mattress folds back on itself during the day to reveal the eating nook underneath.

As seen, the table width is a squeeze if you’re carrying a bit of weight, but this could be easily accounted for during construction by modifying the table width or having fold-down sides. The seats, at 765mm long, might fit four at a pinch. The table, however, has to be collapsed to gain full access to the deep drawer beneath the foot of the bed.

The seats either side of the table have limited back support as they are adjacent to the screened, slide-open side windows. I would like to see these moved forward to provide room for higher backs across the full width of the seats. There are four large screened windows in the pop-up vinyl walls, giving good cross-flow ventilation.

Either side of the entry door are two large cupboards, with flat usable 410x640mm areas on top. The one on the right contains the Redarc BMS30 battery management system, optional inverter and large 165Ah AGM battery. The decision to go with the single battery was made because of cost and weight advantages.

All electrical circuits are individually switched with circuit breakers, not fuses, and there is a 240V inlet and a double outlet inside. There are also two of the ubiquitous 12V and two USB outlets.

Providing for your entertainment is a voice-activated Pioneer stereo, with Bluetooth, CD capacity and USB and auxiliary input.

On the roof are two permanently mounted 150W Redarc solar panels which would do a good job of sustaining the electrics that power the camper.

The sole internal light is on the front wall between the two pillows, which is handy for reading in bed but limits visibly to the rear cupboards. A couple small light bars could work here.

The high quality cabinetry is available in a range of colours and finishes but we spotted a few small gaps between the heavy-duty vinyl walls and the roof in the top corners. Again, another minor easily remedied issue.

Options include a Dometic reverse-cycle air-conditioner and a poly-cotton tent which can be attached by a zipper to the awning as a base for children or guests to sleep, with ready access to the camper and its comforts.

The Kelly team is currently working on a slide-on version and has another coming with a front body extension out over the storage box for added internal room, so this is a company that is open to suggestions and a wide range of alternative modifications.

The Kelly Campers Glenrowan II is a competent and comfortable hybrid camper, with a bunch of luxuries and all the basics needed to make it a mobile home anywhere in the bush. Its shortcomings are few and relatively minor and easily remedied and its strengths are enormous. There is great attention to detail and a lot of original thinking and the quality of design and construction is excellent.

With a three-year warranty on the basic camper and a price, as we saw it, including fridge, porta-potti, gas bottles, hot water service and stoneguard was $64,990 which. in the scheme of things. is pretty good.

The Kelly Glenrowan II can be put in the category of ‘highly recommended’.