It’s with that in mind we loaded up the 4WD with servo snacks and cold beer to head north to D’Aguilar National Park, an hour or so inland of Bribie Island to check out the new Australian built Aussie Swag Campers Ultra Max, a top-of-the-line electrically operated rear-fold with more bells and whistles than you can shake a pole at. A ground-up design, on-shore manufacturing and trick composite construction sees the Ultra Max punch in at close to three times the price of your typical imported camper, but is it three times the value? 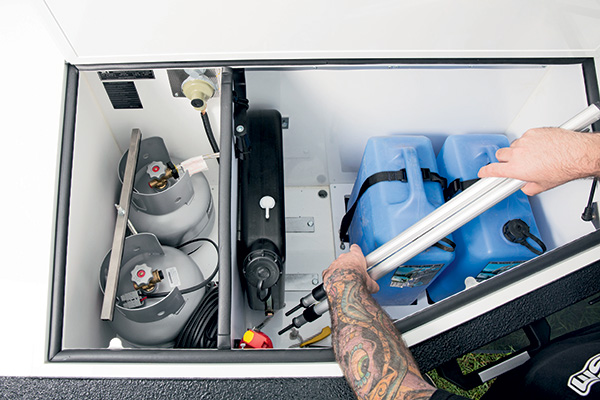 If you’re on the hunt for a hardfloor camper in Australia you’ll have to face a few inconvenient truths. Some are obvious, where the cheapest camper doesn’t always represent the best value. Others are a little more complicated, like why do so many look the same even when they’re built in different factories? It’s because of this, campers like the Ultra Max are off to a strong start before they’re even opened. A design, although familiar, of its own accords is a sure-fire sign that plenty of thought has gone into its usability, and it’s not just another slap together and wait for the cash to roll in camper. I tried to make an acronym for that, but I’m not very good at them.

I’m not going to mince words here, to get your backside in a camp chair outside the Ultra Max will net you a cool $63k, or roughly the price of a new Toyota HiLux with optional leather trim. When I heard the price I figured one of two things has happened. Either the team at Aussie Swag lived the lifestyle of Gina Rinehart with no concept of what things cost, or it was $63k worth of camper and the price of others had pushed the average artificially low. Thankfully it was the latter.

As we ran through the trailer from front to back it was clear how much more thought went into the Ultra Max. Little details like the drawbar extending all the way to the suspension mounts are just unheard of in most budget offerings, and composite normally refers to some shady loan payment structure, not a high-tech panelling that keeps weight down and space up. The standard formula of a rear-fold camper was all there so despite having looking like a product worth three times the price you had that immediate familiarity with most things falling to hand exactly where you’d expect them to be. Just the paint was shinier, the construction more stout, and the finish more professional.

Alright, so you’ve swiped the credit card, flipped the boss off and you’re heading bush in your brand new Ultra Max, what does it your afternoon look like? Unsurprisingly, simple. Packing the camper is incredibly easy. There’s huge amounts of storage with access hatches down both flanks making it easily accessible parked up in your driveway without going through the rigmarole of hoisting open a camper. You’ve got quick access to battery and water storage levels with a pair of digital gauges hiding inside the fridge box, likewise the water tank is easily filled from outside, as is the battery with external 240V in. Even the under-bed storage can be accessed without opening the camper, simply drop the rear access hatch and pull out the trundle tray, although if you’ve made use of the extra space and jammed a few camp chairs in there you’ll need to remove them first.

Setting the camper up is one of the easiest you’ll ever come across too, making late arrivals into camp a non-event rather than a legal reason for divorce. The first, and largest point, is the camper opening is completely electrical. With a huge Linak ram pushing the camper open and pulling it close with ease, you’ll literally just need to stand there for a minute with your finger on the button. It’s a good thing too, because despite the low-weight body with composite construction, the awning and annexe both stay attached to the main body of the tent when it’s packed up, so it’s incredibly fast to set up but would be a slog to swing the lid over by hand. There’s no encyclopedia of spreader bars either, the 7m long awning takes just five poles and handful of guy ropes to set up, and the annexe can be popped up with just two poles.

That same mentality of ease of use has been transferred over into the kitchen too. There’s an almost overwhelming amount of pantry space with two full length drawers for food items, a trick fold-down serving area next to the fridge, and a swing around kitchen right near the lot so you’re not running from fore to aft every time you forget an ingredient. The layout is fantastic with everything within easy reach, huge bench space and minimal time setting up. We found the stainless steel kitchen a great unit but Aussie Swag was quick to point out production models would be receiving an upgraded unit with a Dometic stovetop and more storage. The result is a camper with huge floor space, and all the bells and whistles that doesn’t take an hour to set up and enjoy. You can go from rolling into camp to cooking up a feed with a cold drink in hand in around 10 minutes, so it’s safe to say the Ultra Max scores well in both storage and practicality.

Alright, so what’s this rig actually like offroad? That really comes down to what your definition of ‘offroad’ is. For some, it’ll be 20,000km of dirt roads and isolated beaches, for others it’ll be rock-bouncing up a rutted-out goat track requiring 35s and diff locks. If you’re after the first option the Ultra Max is more than up to the task at hand, with the chassis giving a stout platform that’ll hold up to years of abuse. Starting from the hitch there’s a huge 150x75x3mm hot-dip-galvanised drawbar running all the way down to the suspension mounts. The suspension is Vehicle Components adjustable Cruisemaster XT range with a single shock (actually on a decent working angle, too) and coil springs either side. From here the chassis tapers down to a more sedate 100x50x5mm which is still around double the thickness of most tow-tugs. In the wheel arches there’s a set of 265/75 R17 Maxxis all-terrains wrapped around a set of trick black alloy wheels that are then stuffed full of 12in electric brakes.

As I said, the Ultra Max is on a very sturdy platform.

You’re not going to break it going through corrugations, or beach washouts, or bulldust. And it’s pretty light too at 1420kg, so unless it’s loaded to its full ATM of 2000kg it shouldn’t act like an anchor in soft terrain either.

But, and there’s always a but, the Ultra Max is a big camper. The trade-off for huge living space and quick setup time is generally a huge packed up footprint. From hitch to tail lights it’s 5200mm long, longer than some hybrid campers and it literally dwarfs many other rear-fold campers. It’s a fantastic thing if you’re after plenty of room when you’re set up, but it is something to consider if you spend your time in tight switchbacks or traversing steep washouts.

When you’re shopping in the budget end of the market you almost expect frivolous extras like wheels and tents without holes to be an additional charge, but if you’re seriously eyeing off an Ultra Max it better come with everything, and not just the kitchen sink. To that end it didn’t disappoint either. Up front on twist locks is a huge 150W solar panel that can be removed and re-positioned for maximum efficiency, there’s an Anderson plug wiring it into the 20A DC-DC charger with lengthy patch lead if you relocate it around camp. There’s a second Anderson on the drawbar if you want to charge off your tow-tug instead. Rather than your standard AGM battery you’ll often find, the Ultra Max is fitted with a 200Ah Lead Crystal unit. They’re a halfway point and a similar capacity and weight to Lithium Ion, with the robustness of an AGM unit. This one feeds into a whole bunch of easy to use LED lighting throughout with an external light as well and huge 1600W 240V inverter for running large electrical items like coffee machines or a microwave if it turns out you don’t like camping after all. Inside and out there are plenty of 12V and 240V outlets and the Waeco CFX-95 dual zone is included in the purchase price too.

There are a few features standard that many others offer as optional extras too. The most obvious is the diesel hot water system. It’s a Webasto unit so can double as a diesel heater for colder months and runs off a separate diesel tank stowed in the cavernous front storage box. In the hotter months the tent has a unique roof vent system that lets hot air bleed out the top of the camper and disperse under the tropical roof. Even the gas bottles are thrown in, but the muddy foot prints were an optional extra. Provided by us. Sorry Aussie Swag.

It’s funny how relative price is. Tell someone you just bought a one bedroom apartment, beach side in a secluded spot and it came with all your appliances for a hair off $60k and they’d be beside themselves trying to get one of their own. Tell them it’s full of Australian-made gear with no corners cut, a huge covered outdoor area and they’ve even thrown in a comfortable mattress too and they’ll be jumping out of their skin. Now mention that the apartment happens to have wheels and things start to change a little with people screaming for the cheapest option, even if it falls apart a few years down the track and is a nightmare to actually set up.

It doesn’t make a lot of sense does it?

When you buy a camper like the Ultra Max it’ll last far longer than budget offerings, is significantly nicer to spend time in and tow, and will hold its resale value longer making the price difference almost negligible. If you’re someone who pops onto forums constantly asking what the cheapest version of an accessory is, this isn’t the camper for you. If you’ve found yourself asking what the best of everything is then the Aussie Swag Campers Ultra Max just might be what you’ve been looking for.