For years campers have been pigeon-holed into one of two categories. Tough, offroad ready campers primed to take on the far reaches of Australia, the kind of camper you can punt across rivers, weave down through rock ledges and pound on corrugation after corrugation.

The other? Budget campers. These are something most people use as an entry into the market. A camper designed and priced to get suburban families out into the local campgrounds in comfort, they generally put features over build quality, trading offroad ability for niceties to make camping more enjoyable while keeping the bills down. The two are rarely thought to overlap, but Mars might beg to differ.

On our recent jaunt to Cape York, Mars Campers’ National Sales Manager Celso Prado joined us on the journey, hitching up one of their top tier forward folds, the Spirit 2Pac. Behind his typically modified 150 Series Prado, Celso and his best mate Phil aired down the tyres and set about taking on some of Cape York’s most stunning and remote locations. From the wide-open savannahs of Battle Camp Road to the endless corrugations of the Peninsula Development Road, right through to a series of never ending river crossings of the Old Tele Track. Two smelly blokes, a heap of camping gear, and some of the most iconic destinations you could ever dream of heading to, sounds like the perfect test of a camper to me. 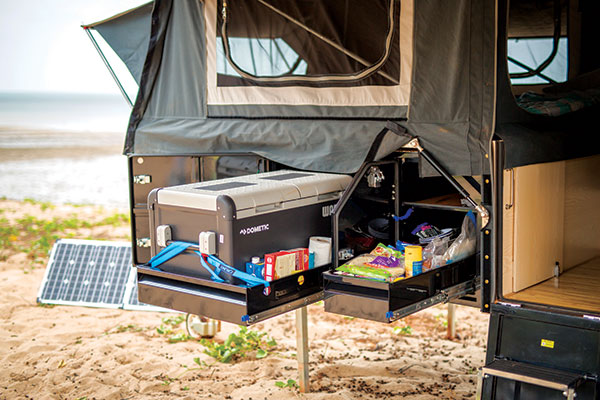 Now it’s no secret I’m a big fan of Cape York, and part of the reason why is the sheer diversity in terrain. It’s the perfect adventure with something new to see every hour of every day, but also serves as the perfect testing ground for camping gear.

The first shake-down run the Spirit would face would be the winding tracks through the Daintree Rainforest. Celso’s Prado is running the older D4D engine and coil spring rear, meaning it’s very susceptible to weights, especially in steep terrain. Despite that, the Spirit's relatively light-weight, 1350kg, meant the hill climbs were easily conquered. With the terrain occasionally slippery and convoy tight for photography, the low-range stick was regularly engaged to help keen RPMs up and take the load off the engine. Of course, we needed to slip back into black-top mode on some of the concrete sections to avoid grenading the transfer cases.

Once up and out of the Daintree we found ourselves on Battle Camp Road. For those not familiar with the road, it links between the east coast communities of Cooktown and Hope Vale through to Musgrave Roadhouse in the centre of the peninsula. The road itself is 240km entirely on dirt but varies drastically as you travel along its length. The start is winding elevations as we cross the Great Dividing Range, weaving our way up and down mountain ranges the Spirit proved compliant and stable, maintaining composure dodging wayward wildlife and surprise creek crossings as they found us.

With corrugations and high-speed dirt conquered, the next real test for the Spirit was the Old Tele Track itself. We bypassed the lower half to suit some of the trailers on the adventure but re-joined the iconic track where it and Bamaga Road cross paths. With the Spirit in tow we pointed our spotlights north through the murky waters of Scrubby Creek after a dip at Fruitbat Falls to wash the dust off us. For the next few hours Celso snaked the Spirit in and out of trees, over rock ledges, and through crystal clear water, testing not only his mettle as a driver, but the camper’s seals (which I’m happy to report were more than up to the task, something even the tow-vehicles couldn’t boast). The Spirit’s relatively narrow profile meant it’d easily follow the Prado through the tight terrain and in many cases actually helped settle the rear of the tow-tug down, acting as an anchor of sorts.

By the time we arrived at Loyalty Beach we were battered and bruised, but the Mars was still going strong. A sponge and bucket and Celso and Phil had it looking tip-top for it’s time to shine under Jack Murphy’s lens. The aluminium checkerplate covering on leading edges not only helped keep the weight down, but also protected the body from the liberal peppering with stones on our journey.

Forward fold campers are nothing new for family camping. They give you a clean platform up out of the dirt and muck, a comfortable bed for mum and dad as well as a dinette for family meals that drops down into a second bed when the sun finally settles for the night. I can’t say I’ve ever seen a forward fold used like this before. With Celso and Phil both along for the ride the dinette rarely saw use, instead the camper functioned as two separate bedrooms, one for each bloke. I assume the privacy screen was set up each night, but I didn’t dare poke my head in to check. The whole affair took the pair less than five minutes from go to woah. A few adjustment legs if they disconnected it, yank the lid over and pop a couple of poles into the window openings to promote air-flow when we were far from a sea-breeze. There’s a few adjustment poles inside that need to be kicked into place but with the forward fold design none are difficult to get to.

Like most forward fold campers, the Spirit comes with a full awning set-up. There’s plenty of poles in the bag if you’re more focused on making your camper look picture perfect than actually using it, but Phil and Celso were able to throw their awning up with the bare minimum poles making it a quick and easy affair to get shelter over our heads. Over the course of the trip the pair fired up plenty of meals on the included kitchen, but the real winner was the portable barbecue they’d set up by the gas bottles up front. I can still smell the barbecued pork belly now.

A SPACE FOR EVERYTHING

The Spirit doesn’t break any new ground in terms of storage, but that’s not necessarily a bad thing. Kicking the lid over, there’s loads of room on the floor inside as well as under the table for bulky items like pillows and bags of clothes. Sheets and blankets can stay strapped to their respective beds preventing them from eating into precious space. There’s also space under both flanks of the lounge, they’re around the wheel arches and a little goofy to access so are best for long term storage things like spare wheel bearings and hose connections rather than daily items. There’s reasonable storage in the kitchen as well with enough room for bowls, cups, and plates under the sink with a usable cutlery drawer under the gas cooker.

Like most forward folds the bulk of the storage is in the front box. The passenger side has room to store most large fridges with Celso and Phil loading up a dual zone Waeco for Race to the Cape. A pull-out pantry hides inside the next compartment with pole storage directly above. The driver’s side storage box features a large vented box perfect for generators, portaloos, or old socks.

There’s a divide amongst camper trailers that comfort can’t equal capability and it’s simply not true. Yes, the lighter something is the more capable it’ll be, the smaller it is the easier it’ll be to steer around offroad, and the more engineering that’s gone into it the more competent it’ll be when the going gets tough. And hey, if you’re heading off into the sunset to take on every challenging track you might want the smallest lightest trailer you can find, but the Mars Spirit proved you don’t need all the bells and whistles to get out there and explore Australia. It supported two blokes for weeks on end and could easily do the same with a family. It was never the deciding factor on whether or not we could take on a track, never once had a failure, and didn’t let a drop of water in despite floating across a 100m river crossing.

When you factor all that in and remember it’s one of the most affordable campers on the market it starts making a whole lot of sense. Sure, you don’t get the flashy designs you might with other manufacturers, but I’m yet to see someone miss out on an adventure because their trailer wasn’t flash enough.