Well, didn't the new kid of the block ruffle a few feathers at CTOTY! Heads turned and mouths gaped as this space shuttle-cum-camper pulled into camp, the brains and brawn behind it a 30-year-old whizz-kid with a dazzling  future ahead of him. There's so much that's new, exciting or just plain top-quality, but our favourite feature was the stargazer roof: an enormous glass skylight above the bed where staring at the night sky has never been more comfortable. Hello, romance...

The BRS Offroad builders have chosen a neat mix of materials to house their customers when on the road. Sitting on a tough one-piece 150x50x3mm hot-dipped galvanised chassis, the body is made from a tough marine grade aluminium lower section that is bonded to a 32mm-thick heavy-duty foam insulation upper section with hand laminated fibreglass outer skin. This is an arrangement that is both tough and insulates against weather and noise and, with its epoxy-floored interior and PVC internal furniture, is easy to keep clean in a dusty outback environment. 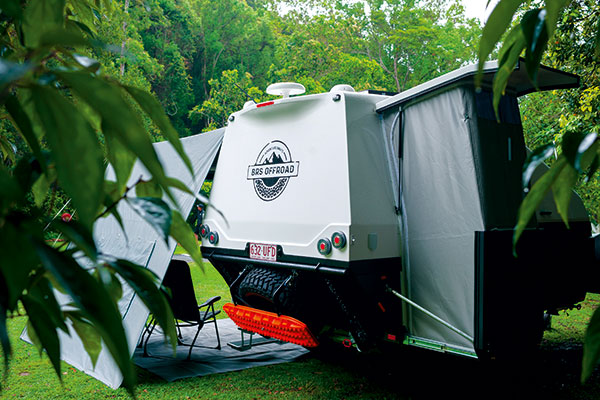 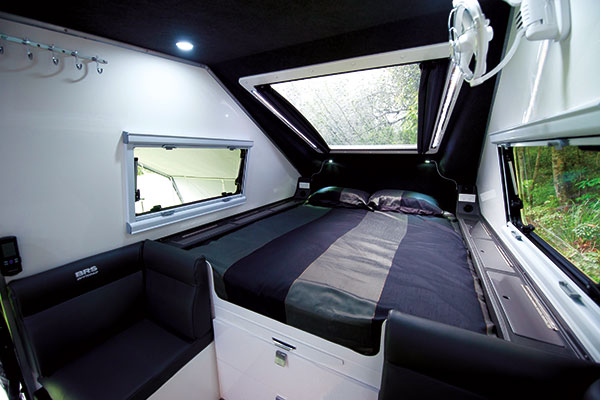 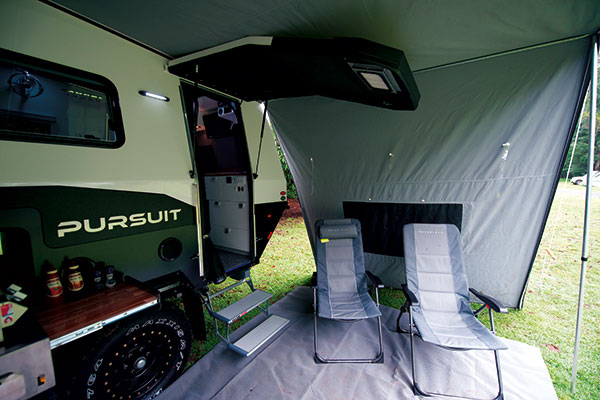 If there is any issue with the BRS it’s going to be in that high roof line. This was an intentional design feature to give good head clearance inside without creating the avenue for dust entry, added weight and the structural compromise of having a pop-up roof. It will limit the garaging of the camper at home and may present some clearance issues with low branches, but you have to consciously make that choice.

Offroad, the Cruisemaster level three airbag suspension with its dual shocks will keep the show rolling in just about any environment, aided by high ground clearance, great departure and ramp-over angles, the DO35 hitch and the relatively light 1600kg Tare weight at its fully optioned setup that we saw at CTOTY.

This is not a camper to be towed around by a softroader – its load capacity of 1000kg alone would rule that out – but for the serious camper trailer devotee this is a heck of a trailer.

BEAM ME UP, SCOTTY

As the BRS Pursuit pulled into camp at the Mount Warning Rainforest Retreat, heads turned, conversations stopped and brows furrowed. What was this space-age contraption with its perplexing geometric lines and rotund derriere? Who were these impossibly young-looking lads accompanying it, looking proud as punch yet entirely humble? We’d never seen anything quite like it – or them – in the camper trailer market, and to say we were excited to take a closer look would be an understatement.

Well, dear reader, I can now answer your questions. The ‘contraption’ is a completely new concept of offroad hybrid camper trailer designed specifically for Australian conditions, and the ‘lads’ are business partners in their early 30s, one an investor and the other the brainchild behind the incredible feat of engineering and design that is the Pursuit.

He literally reinvented the wheel with this thing, taking his experience working in caravan manufacturing and adapting it to suit his own idea of what makes the perfect offroad hybrid: capable, comfortable and dripping in technical gadgets and construction techniques. And I can confirm without a shadow of doubt, the kid done good.

Reviewing campers and caravans is one of those things that gets easier the longer you do it. Things generally fall into categories and you’re able to peg things against comparable products. It's a 'XYZ did the ladder better than ABC' kind of affair. The BRS Pursuit Platinum is almost impossible to peg against anything else – because there’s nothing else like it.

The setup is incredibly quick, with most of the fundamentals staying exactly where they are. Two-up tourers will appreciate the full sized queen bed that doesn’t require a degree in Twister to set it up, just get in and go to sleep. The BRS Offroad team have thought through how a camper is used and put their own spin every step along the way. Even opening the door is as simple as pressing a button – the electronics will take care of the rest.

Once you’re inside, you’re faced with what can best be described as a micro apartment – the bed is comfortable and flanked by power options, lighting and storage, and the windows have block-out shutters so after one too many bottles of shiraz you’re not woken up at the crack of dawn (and that includes the huge stargazer window above the bed).

At the foot of the bed is what you'd call a hallway. Along its length is a full internal kitchen so you don’t need to fight with an awning just to cook in the rain, there are twin 30L Waeco drawer fridges tucked under the bed, too. Opposite the entry way is a unique fold-out ensuite that means you don’t need to do the nudie run if you forget clean jocks. Inside, the temperature is controlled too with gas heating, and AC helps the insulated walls and roof keep things under control. The shower and sink are kept hot through either a 240V or gas heater.

The BRS Pursuit Platinum might seem a little unconventional in terms of layout and liveability, and that’s because it is. They’ve laid out everything you need, then worked out how to make them fit in a compact package without it feeling claustrophobic – and that should pique the interest of anyone keen on remote touring.

When it comes to self-sufficiency, all we can say about the BRS Pursuit Platinum Edition is WOW – simply WOW! The personal facilities seem limitless with a huge amount of storage in cavernous compartments and an array of drawers; a fully heated and air conditioned cabin, plenty of 240V and 12V outlets and a mixture of terrific mood lighting including natural and illuminated lighting thanks to the magnificent skylight and surrounds.

To keep us all feeling human at the end of a long day on the road, or perhaps the start of yet another, the pop-out shower gives this camper a truly individual edge on the competition.

The water supply starts with a large 127L baffled fresh water tank plus a further 85L reserve both with 3mm aluminium bash guard. There’s a further 75L alloy grey water tank which allows you access to a greater variety of restricted locations. The hot water system is an instantaneous Sunburn 240V gas with 12V igniter and the water system is fed via a Sureflo pressure pump and filtration system and comes complete with a porta-potti for flexibility.

To keep us nourished and refreshed there’s a Waeco 95L dual zone fridge freezer backed up with two 30L drawer fridges inside the cabin plus a 900W microwave and twin-burner sizzler barbecue. There’s enough gas for an extended sojourn with two 9kg bottles and you can fill the twin 20L jerry cans with even more water or fuel.

The premium electrical supply starts with a powerful 200A Enerdrive lithium battery complete with its own Bluetooth app to keep the supply monitored on your portable device, or the BMS. It is charged by either Anderson plug from the towing vehicle or the 300W Monocrystal solar panel and 60A charger. This powerful system also has a 1600W Enerdrive automatic transfer inverter with Enerdrive 25A DC-DC booster, Blue Sea Systems breakers and fuses, six double pole 240V outlets throughout camper, four exterior floodlights, four 12V sockets and two USB sockets.

Communications systems are vital, and to ensure maximum coverage, the smart young gentlemen from BRS even fitted a Cel-Fi Go 3G 850Mhz or 4G 700/1800 booster to dramatically boost voice quality and increase data speeds. It quickly became the hub for our service-starved adventurers in the low connectivity setting for this year's CTOTY.

Check out all the action from CTOTY 2018 in issue #123 of Camper Trailer Australia magazine. Subscribe today for all the latest camper trailer news, reviews and travel inspiration.