Hybrid taste but rear-fold money? The Jawa Trax-12 might just whet your whistle. At a hair under $35K, for its base offering,, it's one of the most affordable hybrids on the market. Its build quality and offroad ability won't set the world on fire, but the somewhat uncommon bunk arrangement does mean a family of four can tour in relative comfort under a hard roof without breaking the bank.

When shopping for a camper it’s not hard to see the ‘must-haves’ that push the budget way out of the average punter’s reach. Add the word ‘hybrid’ into the mix and many don’t even bother looking. In a crowd of six-figure campers, the Jawa Trax-12 is a refreshing change, at least as far as the bank manager is concerned. At less than $35K, it’s hands down one of the most affordable hybrid campers on the market, and promises value for money in a proven package. 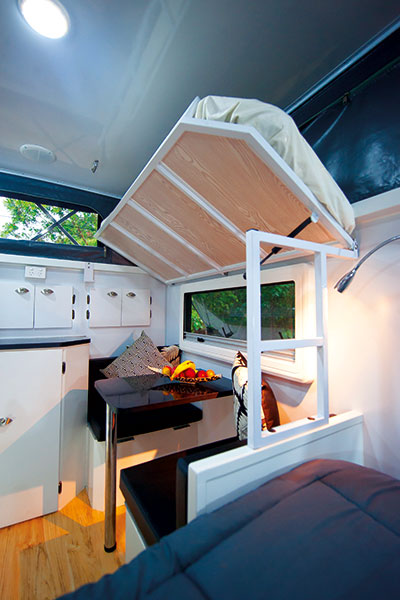 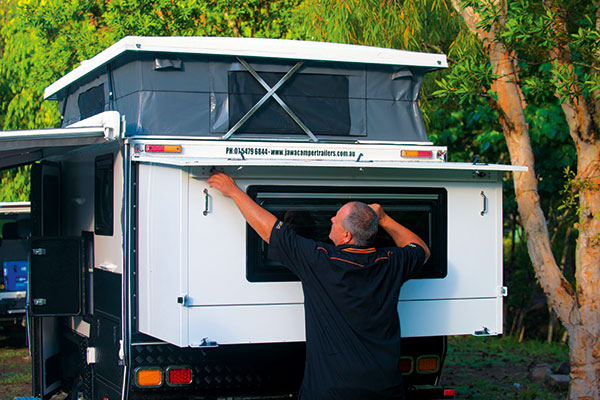 It’s diminutive in size too, not just in cost. At 1690kg and 5500mm from hitch to taillight it’s comparable in bulk to most typical camper trailers, with the benefit of folding out into what is essentially a 15ft caravan.

While it’s hardly the first rear-fold hybrid we’ve found, it’s not without its own selling points. Jawa includes a fully enclosed awning as well as a freestanding ensuite. The model Jawa presented for judging was equipped with a bunk bed and dinette option rather than the internal ensuite that is also available. It means there’s plenty of room for a couple of little ones to come along, making it a reasonably easy four-berth option. The Jawa Trax-12 ticks all the right boxes: affordable, reasonably capable and plenty of gear for the money. But is it enough to topple hybrids three times its price?

The Jawa Trax-12 is a 12ft hybrid van that gains an additional 3ft at camp thanks to its rear bed extension design. This makes it a compact unit in transit but don’t expect that to equate to lightweight, easy towing – this Jawa is actually pretty heavy at 1690kg Tare with an ATM of 2300kg. That’s in part thanks to its heavy-duty chassis construction of 150x50x4mm hot-dipped galvanised steel riding upon independent trailing arm suspension, which will allow for some offroad exploration aided by 16in mud terrain tyres.

It’s all pulled up by 12in electric brakes. Articulation is facilitated at the hitch by an Ark offroad ball coupling, and the front end including the toolbox is protected in checkerplate steel.

The body of the camper is constructed from aluminium composite panel walls with solid fibreglass roof and frontage. External cabinets and doors have rubber seals to reduce water and dust ingress, and on the underside the poly water tanks have bash plates to help minimise damage when the camper is dragged over rough terrain.

The most affordable of the offerings in the hybrid category, the Jawa is targeting a totally different market to most of the campers it's competing against. It comes in a range of configurations including a bunk option to suit a family. I found the set-up a little fiddly, however, and would like to see greater attention to detail in terms of quality of finish and weight minimisation.

I’m all about easy, especially when camping. But I do appreciate some level of comfort. The Trax-12 delvers with an exceptionally easy three-minute setup for a comfortable overnighter, or a few minutes more to wind out the awning. It has a solid aluminium body with pop-up fibreglass roof, 200L of water, plenty of power, tonnes of cooking, refrigeration and creature comforts – even an extendable bed unit that creates immense volume for a fully enclosed queen sized bed. Phew – it’s got lots, eh!

The Trax-12’s Tare weight of 1690kg makes it quite easy to tow and weighs little more than most forward and rear-fold campers. Aesthetically it’s quite a nice looking unit with its white body and black window frames, drawbar and checkerplate protective panels as offsets. There are twin gas bottle and twin jerry can holders, a large fridge compartment, 2x120Ah batteries and plenty of charging and power outlets to keep those essential gizmos running including 200A portable solar panels, and a 30A battery charger.

To set up, the whole rear extenda process could be done in about 30 seconds. Then hop inside to lift the fibreglass roof with its easy spring-loaded mechanism. Full assembly is just as easy. Wind out the overhead awning, slide out the kitchen and pull out the fridge slide – and don’t forget to turn on some music from the Bluetooth stereo, fold out your camp chairs and find your drink holders!

Inside is a tonne of head room plus heaps of light and ventilation options, plus the fibreglass roof provides added insulation and drop lighting options. Under the bed is a compartment for a porta-potti that can be kept inside, but I’d take it outside to the free standing 16oz canvas toilet/shower tent. This comes with a portable gas hot water unit along with the solar panels, a padded vinyl stoneguard for the front and battery charger.

There are plenty of storage options plus attractive benches, pots and pantry storage and even a proper wardrobe. We loved the small convertible two-person dinette with the table dropping down to form the base for a small bunk. Overhead is a foldaway bunk making it suitable to a family with up to two small children. There’s a 240V outlet at the benchtop and multiple 12V and USB sockets plus the entertainment unit.

I’m not a caravan tourer and rather enjoy the freedom of travelling a little lightweight but with considerable offroad ability. Plus I demand immediate, easy creature comforts or I will lose interest very quickly. The Jawa White Series Trax-12 hits this target with a bullseye.

THIS ONE'S ALL HYBRID

The Trax-12 could as well be considered a caravan as a camper trailer – in other words, it’s a true hybrid. It has an offroad capability not available in most caravans, so for the end user who wants to enjoy the delights of those long corrugated outback tracks or rocky creek beds with the outdoor living experience – especially where budget is an issue – this camper has a lot to offer.

The Trax-12 was the cheapest of the hybrids  and it came moderately well equipped for long stays off the grid. There were two filtered 100L stainless steel water tanks, with a gas instant hot water system for showers and the kitchen.

Electrically the camper had two 100Ah AGM batteries plus a 200W folding solar setup. This is fine, though a once-off 100 per cent state of charge to return it to a reasonable figure may be a problem in cloudy weather. The 6mm cable through the Anderson plug would limit the alternator’s ability to get a charge back above 75 per cent SOC; a DC-DC charger as an option would help. The 30A mains charger option is adequate for battery capacity when there is access to mains power.

The awning at 2000x3000mm is relatively small – limited by the size of the camper – so the sheltered living space outside is restricted and the optional rear wall is necessary for sheltering the kitchen in bad weather. In this event, the front wall, which angles out and down, is needed to shelter the fridge at the front.

Check out all the action from CTOTY 2018 in issue #123 of Camper Trailer Australia magazine. Subscribe today for all the latest camper trailer news, reviews and travel inspiration.